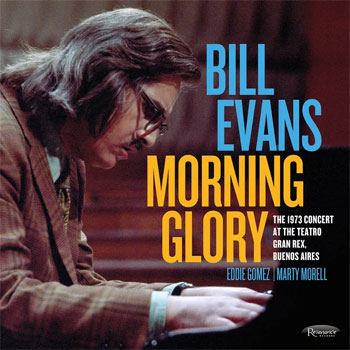 A week’s worth of coverage of new vinyl releases kicks off with a vintage recording.

Bill Evans earned fame for his work with Miles Davis, and went on to an acclaimed solo career. Much of the pianist’s most important work was done within the trio format; his short-lived lineup with bassist Scott LaFaro and Paul Motian yielded the sublime Waltz for Debby (1962). A tragic accident killed LaFaro and ended that trio mere days after a session; devastated, Evans eventually rallied and continued his work.

A key character in much of Evans’ subsequent output – he remained busy until his death in 1980 – was Eddie Gomez. Gomez was part of a trio with Evans that featured drummer Marty Morell when the group played a 1973 concert in Buenos Aires, Argentina. Resonance Records – Zev Feldman’s archival label responsible for landmark archival releases of previously unheard recordings from major jazz figures – has unearthed a recording of this performance (and another, which I’ll cover in a separate post) and released it as Morning Glory: The 1973 Concert at the Teatro Gran Rex, Buenos Aires.

This new set – available as a 2CD set and a breathtakingly packaged 2LP set – defines the word essential. The sound quality is stunning, up-close and personal in the manner of the finest studio recording. And the performance is typical vintage Evans Trio. With a set list that opens with the anagrammatically-titled “Re: Person I Knew,” the Trio floats through a list of songs including familiar favorites (“What Are You Doing the Rest of Your Life,” “My Foolish Heart”) and some then-more-recent but equally delightful numbers (“T.T.T.”).

Evans’ inimitable style – featuring what musicologists call his “note clusters” – meshes seamlessly with Gomez’s subtle and expressive upright bass work. Gomez turns in some especially lovely bowed bass on “The Two Lonely People.” Throughout the set, Morell’s brush work is always spot-on as well. And nobody else sounds quite like Bill Evans; his dazzlingly complicated yet somehow deeply lyrical and accessible approach won him acclaim, and it’s on brilliant display here.

As is typical of a Resonance release, the set’s assets extend well beyond the wonderful music. The package is filled with photos – color and black-and-white – and a 44-page booklet (12 pages in the LP version). As Feldman writes in his introduction, “Our mission is to rescue this important music from the shadowy domain of the copyright infringer and to have it take its rightful place in the legitimately sanctioned Bill Evans recorded canon.”

This release (and another 1979 recording, covered tomorrow) join a growing family of important Resonance releases of Bill Evans material. Released with the cooperation of the Bill Evans estate, Morning Glory is a must-own album for any music lover who appreciates the artistry of this highly influential master.