Most record collectors are familiar with the age-old crate digger stereotype: someone who wanders through basements, garages and back rooms full of dusty, musty piles of old vinyl and shellac, searching for the rare, long-lost and often forgotten piece of music. A modern-day, amped-up version of the crate digger is Zev Feldman. But Feldman doesn’t just spend his time looking through stacks of records; he takes things farther back in the process, working behind the scenes to unearth never-before heard recordings.

Zev Feldman has a long history in the record business. Over the course of his career, he’s worked at Concord, Universal, Rhino and Fuel, among others. During a stint with Polygram Records back in the 1990s, he got a request for the Slim Gaillard collection, Laughing in Rhythm: The Best of the Verve Years. “I ordered one for the customer,” Feldman recalls, “and I said, ‘You know what? Make that two; I’ll get one too. Let’s hear what the excitement is about.” 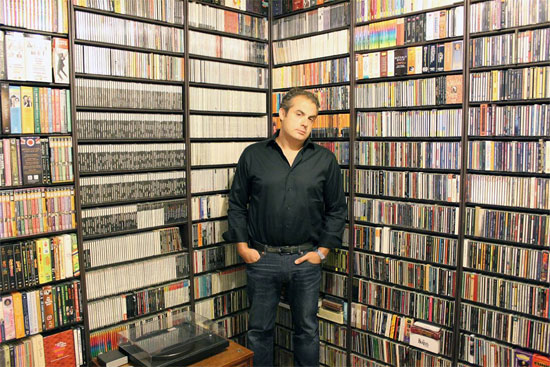 Feldman fell in love with the record. And that kind of thing happens often for the Maryland native who long ago moved to Los Angeles. “Slim Gaillard is someone who has inspired me,” Feldman says. “He really captures everything that is good in the world: love, happiness and fun. I think he’s what’s missing in the world today.”

Fast forward more than two decades from that first encounter with a Gaillard recording. Now Feldman is Executive Vice President and General Manager at Resonance Records, a label dedicated to releasing historically important recordings. He’s also a freelance curator for like-minded projects that fall outside the admittedly wide scope of Resonance. Working closely with Gaillard’s estate (the prolific musician died in 1991) he put together a collection of unheard sides cut in the 1950s. The 15-track Searching for You was released in 2017.

“I’m in a position where I get to dig for stuff for my job,” Feldman says. “And if I’m going to do it, I’m going to interject some personal passion, too.” Passion and determination were necessary to bring the Gaillard project together. Feldman worked closely with collector and release co-producer Tom Samuels. “Tom probably knows more about Slim than anybody in the world,” Feldman says. “He was winning all these eBay auctions, and what was surfacing were 45’s that Slim had self-produced on a variety of small labels.”

The impossibly rare Gaillard recordings are typical of the kind of tapes Feldman seeks out. His boundless enthusiasm comes through whenever he talks about any of the long list of projects in which he’s involved. In recent years, Feldman has overseen the release of many previously-unheard recordings. Some are by little-known artists like Gaillard; others introduce material by some of the most important names in music. Titles from Jaco Pastorius, Bill Evans, John Coltrane, Wes Montgomery, Stan Getz, Art Pepper and Sarah Vaughan have all been released in the last few years.

Working with Sam Records, Feldman recently brought to market the previously unreleased soundtrack to Roger Vadim’s 1960 film Liaisons dangereuses. That music was composed and performed by jazz pianist Thelonious Monk. Feldman recalls when he was first contacted about the existence of the tapes. “I nearly fainted, and my eyes nearly came out of my head!”

But Feldman’s tastes and interests expand well beyond classic jazz and r&b. “I listen to everything,” he says. In 2016, he curated Resonance Records’ Hot Coffey in the D, a sizzling set by Detroit soul/funk guitar legend Dennis Coffey. And Feldman is currently working to release a box set of previously-unreleased material from rock ‘n’ roll pioneer Link Wray. Speaking in metaphor about Wray’s overlooked importance – he’s not in the Rock and Roll Hall of Fame – Feldman says, “Link was the valedictorian of his class, and he was never invited to his own graduation.”

The key to Feldman’s success in his endeavors is threefold. First, he establishes contacts with enthusiastic music fans and collectors around the world. A keen user of social media, Feldman is a regular presence on Facebook, where he networks and spread the news about projects in development. “When I finally have news that I can share, that’s where I put it up,” he says.

Second, Zev Feldman makes a point in every case to involve the families and/or estates of the artists whenever possible. Those relationships – extending beyond business into friendship and deep trust – have helped bear fruit in the form of privately-held tapes like 2015’s In the Beginning, a set of Wes Montgomery recordings from as early as 1949. (Montgomery’s official recording career wouldn’t start until 1955.) “One of the most special parts about my job is working with the families of these artists,” Feldman says.

The third key to Feldman’s success is patience. Some of the projects take four or five years to come to fruition. “I’m a very results driven kind of guy, and I try to get things done immediately,” he admits. But he recalls some sage advice given to him long ago by Resonance head (and Feldman mentor) George Klabin. “You know Zev, it’s not good to want something too badly,” Klabin told him. “And that has taught me to have a little more patience,” Feldman says. But that patience is leavened with a strong, almost missionary zeal to find unheard recordings and bring them to the listening public.

Asked if there’s a “white whale” recording that he’s seeking, Feldman is quick to answer. “John Coltrane and Wes Montgomery performed together at the 1961 Monterey Jazz Festival,” he says. If tapes even exist, “no one really knows where they are. There is also a rumored recording of John Coltrane and Larry Young; that’s something that I’ve been looking for for a very, very long time.”
Still, Zev Feldman is as amazed at anyone at the treasures he has helped to unearth. “I think it’s remarkable that here we are decades and decades and decades later, still finding recordings from these artists,” he says. “And I’m still digging.”

Click Here for another, earlier interview with Zev Feldman.