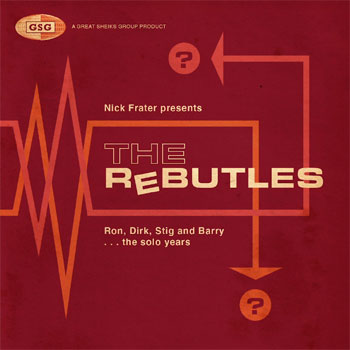 Rock fans of a certain age know about The Rutles. The legend that lasts a lunchtime, the group was the subject of a mid ‘70s mockumentary called All You Need is Cash. The Rutles, of course were a fictitious band, part of the wacky universe that gave us the Bonzo Dog Doo Dah Band and Monty Python. With the blessing of George Harrison, they made an album of music, dead-on pastiches of Beatles songs. (So dead-on, in fact, that they got sued for their trouble. But that’s another tangent.)

In the 1990s The Rutles reunited, so to speak, to make Archaeology, their answer to the Beatles’ Anthology. That was it. Now, well into the 21st century, Nick Frater has taken the meta concept to its next logical level: a tribute to The Rutles.

It’s not as tail-chasing an endeavor as you might think. Frater is a songwriter, musician and producer par excellence, and his deep understanding of the creative, aesthetic and technical elements of Beatles (and Rutles) music is such that he can pull it off. At times, The Rebutles sounds more like the Beatles than the prefab four. His McCartney-esque “Whoo!” howls on the waggishly-titled “Baby I”m Amazing” are spot-on.

“The Lost weekend” is Lennonesque, and while Frater nails the character of John’s voice, he doesn’t sound quite like him. The song is more reminiscent of, say, Badfinger crossed with Tony Hendra (National Lampoon’s “Magical Misery Tour”). Still, impressive stuff.

Initially, “Hah Hah” aims for the rifftastic Revolver/Rubber Soul era, and it hits the bullseye. Then it moves seamlessly into a style that would fit snugly on Side One of Yellow Submarine. And the instrumental “Sodor and Gomorrah” pokes good-natured fun at Paul’s more twee tendencies, including use of wooden train whistle.

No prize for guessing what movie theme is being pastiched in “You Only Live Once.” The tune also has bits reminiscent of Mason Williams’ “Classical Gas,” but the similarity doesn’t reach the level of outright theft, so he needn’t worry about lawsuits. “When We Were Eighteen” answers the (unasked) question, “What would it have sounded like had Ringo made the Cloud Nine LP? The shortish record wraps up with “The Last Laugh,” a lovely tune that – pastiche projets aside – would fit nicely on any of Frater’s superb albums made under his own name.

A busman’s holiday for sure, The Rebutles is a fun way for listeners to spend a few moments. It’s not technically for sale; instead it’s available as a bonus for those who pick up his essential Earworms.