Album Review: Peter Bilt Group — Do It Up 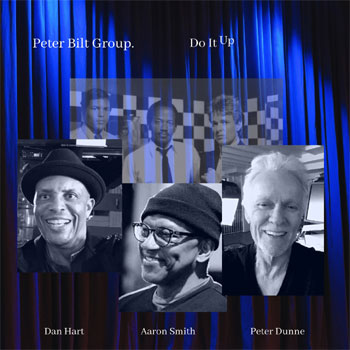 One set of rhetorical questions that I encountered during my research for my new book was as collection of what-ifs. Of the nearly 30 bands that released music on the groundbreaking indie label 415 Records, few realized their full potential. One such case was the criminally underrated band Pearl Harbor and the Explosions. Fronted by Pearl E. Gates, a singer whom I’ve described in Disturbing the Peace as possessed of “an image halfway between undeniably sexy and bring-home-to-Mom adorable,” the group had an atypically superb instrumental core. In the group’s compact, sturdy new wave tunes, one could hear hints of adventurousness that invite comparisons to Television, and a level of musical/compositional/improvisational ambition that set the group well apart from other bands of the era.

But it all fell apart. The band broke up, as bands do, before fully capitalizing on the creative success of its early recordings. And that led me to wonder what a second Explosions album might have sounded like.

On the surface, a new album released in 2021 might suggest part of a possible answer. The Peter Bilt Group launched in the early 1980s, not long (I suspect) after the Explosions, well, exploded. Peter Dunne wrote a fine batch of songs that synthesized his interest in (and facility with) various styles including funk, rock and others.

They recorded material and shopped for a deal, but it didn’t happen for them. Fast forward nearly four decades, and the original trio – guitarist Dunne plus bassist Dan Hart and drummer Aaron Smith (who was a member of 415 Records stars Romeo Void) – is back together. Rather than dust off the old tapes, they’ve made Do It Up, a set of brand new recordings of some of those old tunes plus several new ones.

And in the process, whatever whiff of an of-its-era the songs might have had has been whisked away. These tunes are timeless. Hart’s thick, trebly bass work serves as a melodic element, serving up snaky countermelodies that are set against the primary melodies. Dunne’s breathy vocals and complex guitar figures give the music a character that feels a bit like just-post-Police Sting.

Dunne’s lyrics are intelligent and poetic without being overly arty or intimidating. But Do It Up is really about showcasing that amazing musical interplay between the three musicians. There are hints of bossa nova, soul and jazz, but the music certainly isn’t jazz. The arrangements are deceptively spare; the spaces between the notes are important as ever. But what’s going on is astoundingly complex – think Steely Dan filtered through an avant garde sensibility – while remaining firmly rooted in accessibility.

“Raggedy Place” is a masterful funk workout. “Arcadia” is wistful and contemplative. “High and Dry” shows that dissonance can be catchy. And with “Something to Love,” Dunne show that he can write a memorable pop song for the ages. The prominent yet tasteful keyboard licks are a delight. And “Blue Funk” is a fusion-filled tour-de-force.

The vocal treatments on “Can’t Give Up the funk” are a bit odd, leading this reviewer to wonder if they’re applied ironically. But that’s the closest the album comes to a misstep, and the track’s overall kinetic feel offsets the warbly effect-du-jour. “Faded” is perhaps the album’s strongest track, with each of the three musicians doing his own thing and all three improbably fitting together seamlessly. And “I Need Love” sounds like a hit single.

Listeners who insist that their music fit neatly into one or other genre/style bag will be frustrated by Do It Up. But that’s their problem ,not yours nor mine. The album is a sampler of the many musical moods of the trio, and therein lies much of its strength.

Postscript: Back to that unanswered rhetorical question. One of two bonus tracks, “Dream Within a Dream” dates from the very early ‘80s, and it sounds like it. A terrific tune, it’s very much of a piece with the kind of music that Pearl Harbor and the Explosions were making, and perhaps hints at what that second LP might have sounded like (albeit with Dunne on vocals). A decades old, lo-fi rehearsal take of “Do It Up” serves to show how the current-day Peter Bilt Group took the best elements from its original sound and applied them in 2021 to make an album that (I predict) won’t sound dated years from now.