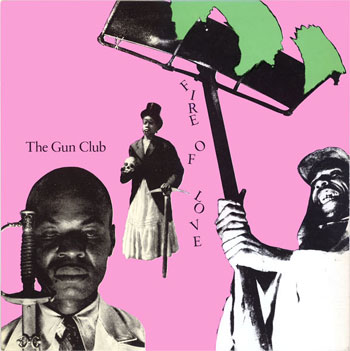 Blixa Sounds released an expanded reissue of the Gun Club’s Miami in 2000, and now their similar treatment of the Los Angeles punk band’s debut album, Fire of Love, is getting similar treatment. Oddly – at least to these ears – it’s more accessible than the second LP. Yes, Jeffrey Lee Pierce’s open relationship with melody is on display, but the punk/roots hybrid that the group pioneered is supremely effective.

If you’ve ever wondered what it might have sounded like had Jim Morrison explored punk, blues and country all at once, “Preaching the Blues” might point the way toward an answer. The band sounds like it’s falling apart on “Promise Me,” but that’s clearly by design. “She is Like Heroin to Me” barrels along, careening wildly toward its finish in two-plus minutes.

There’s not much in the way of variety in the guitar sounds employed by Pierce and Ward Dotson; most of the tone colo comes via the whip-smart rhythm section of bassist Rob Ritter and drummer Terry Graham. That said, Dotson’s frenzied slide work on cuts like “For the Love of Ivy” is exciting stuff.

The original Fire of Love ran eleven tracks. Blixa’s reissue adds ten more to the first disc: alternate versions and demos, they’re thinner in fidelity bu have a similar energy to the official tracks. The second disc presents a 1981 live set at Club 88. There have been numerous Gun Club live releases over the years, but the one included here documents a very early performance.

Graham’s earnest liner notes are worthwhile reading, and the booklet contains some excellent photos of the band.