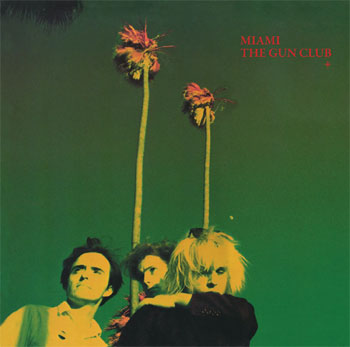 I recall sometime in 1982 when a friend attempted to turn me on to The Gun Club’s Miami. I wasn’t having it: I got most of the way through “Carry Home,” the album’s opening track, and found myself put off by what I thought of as Jeffrey Lee Pierce’s off-key, tuneless wailing.

But subsequent years of exposure to music unbound by melodic conventions — plus the appearance of a new and expanded reissue — have necessitated a reconsidering of the album.

In Pierce’s voice I still hear an an unwillingness (or inability?) to bend to conventional values of melody. But the years have a way of placing art into context. The Gun Club’s minimalist sonic aesthetic – mostly (but not always) Ward Dotson’s single electric guitar, Terry Graham’s elemental drumming and the kinetic, assertive bass work of Rob Ritter – is the ideal vehicle for Pierce’s songwriting and vocals.

That songwriting style falls halfway between cowpunk and Echo and the Bunnymen. There’s a malevolent, minor-key vibe to all of Pierce’s songs, and a twangy punk feel to the tunes. And Pierce’s animalistic howling on a reading of Creedence Clearwater Revival’s “Run Through the Jungle” has antecedence in the Doors’ Jim Morrison, Iggy Pop and Ian McCulloch. His lead guitar on that cover is simple but fiery as well.

The one-chord, droning approach of tunes like “Devil in the Woods” will either entrance the listener or drive them away. Remarkably, it’s the auxiliary players on Miami who help move the music in the direction of accessibility: Mark Tomeo’s pedal steel guitar on “Texas Serenade” and “Mother of Earth” lifts the music out of a punk rut, taking the music a place it wouldn’t otherwise go.

Vocalist D.H. Laurence is enlisted throughout the album to add background vocals. And background is the operative word here: harmony simply wouldn’t have been possible, not with Pierce’s approach to singing.

Blixa Sounds’ new expanded reissue of Miami adds an entire disc’s worth of extras, including demo versions of nearly every song that would appear on the original LP plus some that didn’t make the cut. The demos make plain that most of the band’s arrangement ideas existed fully formed before the band ever went into the studio with producer Chris Stein. Piano – an instrument buried fairly deeply in Stein’s mix – shows up more prominently on the demos. In fact, save for bits of studio chatter and a clausttophobic, flat sound, there’s not a world of difference between the demos and Miami proper.

In 1982 Miami made for an edgy, difficult listen. In 2021 that hasn’t changed, but the album seems less off-putting than it did all those years ago.