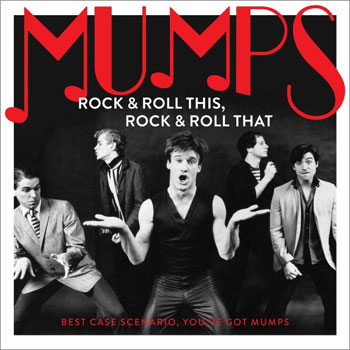 American pop culture consumers of a certain age (aka television viewers) will recall An American Family, a groundbreaking PBS documentary series that first aired in 1973. Setting aside the fact that the program is to blame for the subsequent rise of “reality” (sic and ugh) television, it was nonetheless important in many ways. One of those was in its mainstreaming of homosexuality in a way that was neither mocking nor dismissive. Lance Loud was the eldest son of Bill and Pat Loud, and he “came out” on the program.

The Louds gained quite a bit of media exposure at the time, and they were invited to appear on Dick Cavett’s talk show. Pat insisted that they would do so only on the condition that her son’s rock and roll band be featured as a performer on the program. Cavett said yes.

The band was called Loud (later, Mumps). And Loud/Mumps weren’t The Shaggs. For his band, Lance Loud enlisted the talents of Kristian Hoffman, a first-rate keyboardist who could also compose some fine damn songs. The arc of Loud/Mumps ran from 1973 to about ‘79, and the groups went through a number of lineup changes; only Hoffman and vocalist Loud were around for the entire run. Others who came and went included Jay Dee Daugherty, later of Patti Smith Group, The Waterboys and The Church.

The sound of Loud/Mumps bears some similarity to Meat Loaf, the cast album of The Rocky Horror Show, New York Dolls and even a bit of Television, though Mumps were far poppier than Verlaine and his pals. Loud’s voice was nothing to write home about, but what it was, was absolutely perfect for Hoffman’s songs. Whether it’s a ‘50s pastiche (“Awkward Age”), swaggering cock-rock with harpsichord(!) (“That Fatal Charm”) or moody new wave (“Scream & Scream Again”), the music is fun, catchy and tuneful. It rocks in a way that straddles theatricality and raw, just-play-it rock.

Hoffman’s keyboards are often at the center of the group’s sound, but it would be a mistake to assume that means the tunes are lacking in, er, raw power. A Loud original, “We Ended Up” is as classic a ‘70s Noo Yawk punk-pop tune as anything from those groups whose names you know. “Anyone But You” is a minor pop classic, and the other songs on this set are of similar quality.

It will remain one of popular music’s little mysteries why exactly Mumps never broke through in a bigger way. They had the goods, and their music deserves to be heard far and wide. Mumps were much more than a footnote to discussions about An American Family. Omnivore Recordings’ new compilation – with the lengthy title Rock & Roll This, Rock & Roll That: Best Case Scenario, You’ve Got Mumps – is a necessary addition to any music collection that recognizes the non-commercial side of ‘70s rock’n’roll.

Important Note: Though it makes use of the title and cover art of a 1978 single, Omnivore’s compilation features nearly two dozen tracks.