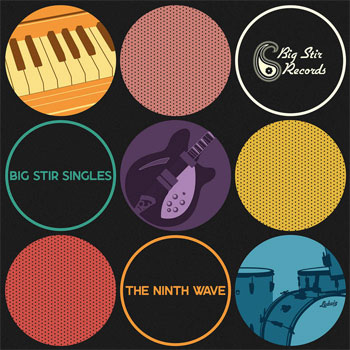 Maybe it’s because I’m a writer, but when I encounter an album that includes liner notes, I tend to read before I listen. Or, at least I’ll start to read as I pop the disc into the player (or if I’m lucky, I’ll drop the needle into the groove.) And that’s the approach I took with this, the ninth installment in Big Stir Records’ ongoing series of compilations.

Mike Lidskin’s witty, good-natured and hype-free essay introduces the disc in a manner that’s effective for both newcomers and those familiar with the Big Stir Singles discs. But of course, the music is the start of the show, and like previous collections, this ninth disc is a treat.

This volume follows the established formula, serving up two songs each by ten-ish artists. And Big Stir’s Rex and Christina curate the disc in an inspired manner, serving up artists familiar to devotees of the label (Dolph Chaney, Nick Frater, the Brothers Steve, Jim Basnight, David Brookings) as well as artists whose names they might not recognize.

The Viewers fall into that latter category; their “Beautiful” is a well-named track. Blake Jones’ voical texture might not be for all tastes (shades of one of the Johns from They Might Be Giants), but his Sgt. Pepper-ish melodies are solid. The Persian Leaps successfully mix power and (to coin a phrase) pop. Mike Daly & the Planets has a winning way with melody. Rosie Abbott’s “Hold On” is a bit out of place stylewise here, but that doesn’t mean it’s not lovely. (It is.)

Only a few tunes are repeats from other sources. Nick Frater’s “Let’s Hear it for Love” first appeared on his Fast & Loose album late last summer. But it’s so good that I don’t object at all to finding it on two CDs in my collection. Same for The Brothers Steve’s “Beat Generation Poet Turned Assassin,” which shows up on this disc twice after being on the band’s superb self-titled LP. And while Irene Peña’s cover of The Fountains of Wayne’s scintillating “It Must be Summer” sounds like a repeat – other than her lovely voice, it’s nearly a copy of the original) a great tune is a great tune.

Every one of these Big Stir sets seems to hold one buried-deep gem, and in this case it’s an ambitious tune from David Brooking (without the Average Lookings, ‘twoud seem),. “All I Love is Rock ‘n’ Roll” conjures memories of Jellyfish.

The new, high-quality music keeps coming fast and furious from Big Stir; Volume Ten is already on my desk. I predict that it too shall be swell.