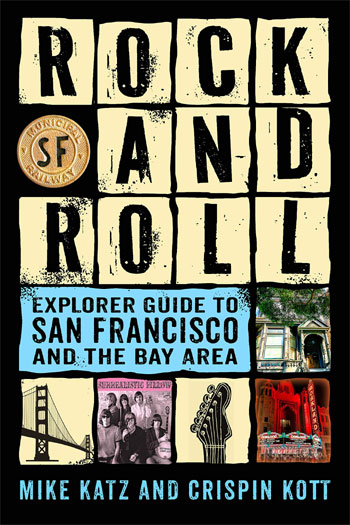 San Francisco has a rich and varied cultural history. The city by the Bay has been home to a long succession of cultural scenes, from the Beat poets to the psychedelic explosion to the punk and new wave phenomenon of the late ‘70s and early 1980s. Relevant to my own interests, I’m writing a book about the latter; Disturbing the Peace: 415 Records and the Rise of New Wave will be published later this year by HoZac Books. And a new book, Rock and Roll Explorer Guide to San Francisco and the Bay Area is a useful tool for both the music historian and the visitor to San Francisco.

Coauthors Mike Katz and Crispin Kott have done an impressive job researching the city’s music clubs, concert venues and other relevant landmarks, and compiling the fruit of their labors in a lively, highly readable work. Readers can approach this Rock and Roll Explorer Guide in any number of ways. The book can be used as a reference too;, and one can look up a given landmark, learning how, when and why it fits into the musical history of the city (and the wider world’s cultural landscape).

Alternatively, one can simply open it at its start and read all the way through. It works differently – but equally well – either way. Because some venues (or succession of venues in a given location) figure into the larger story at multiple points, you’ll find yourself reading about the same place multiple times. But that’s a feature, not a bug.

You might be disappointed to learn that – thanks to redevelopment or earthquakes (and sometimes both), a number of key landmarks no longer exist. So a visit to those spots might not yield much more than a shrug. But a visit in the form of a read through Rock and Roll Explorer is rewarding on its own.

Note to the wise: This book is Katz and Kott’s second crack at such a project; they published an earlier volume giving New York City the same treatment. If this book is any indication, that book would be an equally fascinating and informative read.