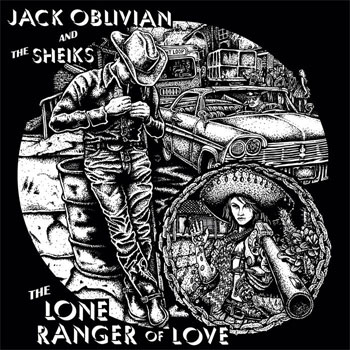 Jack Oblivian and the Sheiks released Lone Ranger of Love in 2016; as good as it was, it quickly went out of print. But Black and Wyatt Records has had the good sense to reissue it in late 2020. If your taste in music leads you to understand that King Khan and the Shrines’ 2008 compilation The Supreme Genius of … ranks among the greatest records of the 21st century, then (a) you already have Lone Ranger of Love or (b) you simply must obtain it.

With an even wider stylistic palette than Khan, Oblivian delivers tunes that explore a Stonesy vibe (“Fast Friends”), full-speed-ahead punk (“Boy in a Bubble”), Southern punkabilly that channels Jerry Lee Lewis without sounding like him (“Home in my Hand”), New York Dolls sleazy swagger (“Downtown”) and T.Rex- style glam with a jungle beat (“Blind Love”). And that’s just the first side of the album. Side Two opens with classic pop wrapped in barbed wire (“Stick to Me”) and continues with a warped rethink of spaghetti western-flavored soundtrack music (the title track).

The two-part “La Charra” hammers home the point that Oblivian has more great musical ideas than he has tunes to use them in. That embarrassment of riches makes for a consistently enjoyable, relentlessly rocking album. He channels Wolfman Jack on “La Charra Pt. 1” while the band – him on guitar, Keith Cooper on lead and bassist Frank McLallen and drummer Graham Winchester – lays down a groove that’s equal parts menacing and hypnotic. The tune’s second part is an instrumental featuring squalling lead guitar over the insistent, chugging riff.

The cinematic “Ride Like the Wind” shows the ease with which Oblivian can shift musical gears: it’s different from everything else on the LP – lots of piano – but it nevertheless fits snugly into the record. Ace guitarist John Paul Keith guests on the album’s closer, “Runnin’ from the Law,” a nod to classic cowboy country that’s a pure delight.