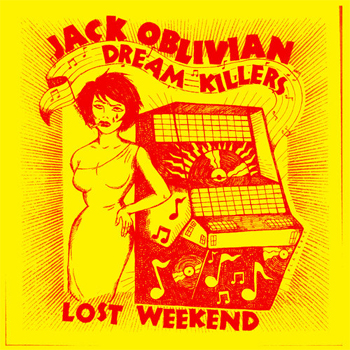 Among the audiophile set, the term “lo-fi” is cause to run for the hills. Having grown up on a steady diet of 1960s garage rock, I have no such qualms. Hell, I even dig “Green Fuz.” And with that in mind, I welcome Lost Weekend, an LP from Jack Oblivian & the Dream Killers that combines a punk approach to musicianship, a primitive recording aesthetic, and an attitude toward session that I daresay Alex Chilton might have enjoyed in his Like Flies on Sherbert days. Moreover, the tunes are all compact: only two break the four-minute limit, and five of the record’s 16 tracks click in well below the two-minute mark.

All of which is a long-winded way of letting you know that if elemental, passionate rock – think Stooges – is your cup of tea, then you’ll delight in the messy, slightly dangerous feel of Lost Weekend. There’s spoken-word blues (“La Charla”) that even mixes in some decidedly un-Memphis-style horns. “Cigarillo 1” has some transistor organ tones accompanying a distorted electric guitar, and that’s it; nothing more is needed. “Girl on the Beach” uses a tinny, cheapo drum machine, but it’s still somehow danceable.

Most of the tunes sound as if they were recorded on a cassette deck using a tape Oblivian found in a dusty corner, taping over the little square holes so he could reuse it. And that fits the production style and musical approach of these songs perfectly. Lost Weekend doesn’t seem to have been pressed on 180-gram vinyl, nor did it need to be. Nervy rock ‘n’ roll at its most basic, at its most real.