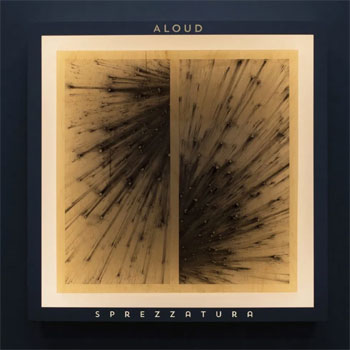 When I reviewed Aloud’s debut single more than two years ago, I expressed my belief that the group had real potential. I had no idea just how right I would turn out to be.

The blaring horns that open “Loving U’s a Beautiful Thing” (and the album) signal that Sprezzatura is going to be a soulful, energetic ride. And indeed it is: there’s a confident swagger in both the musicianship and the voice of lead singer Jen de la Osa that will increase the listener’s heart rate.

There’s plenty of subtlety on hand, too. That same song has a quiet breakdown that serves to underscore Aloud’s skill at musical dynamics. As the tune careens toward its conclusion, the lead guitar seems to compete with the brass for dominance, but in the end it’s the listener who wins.

And having two lead singers only adds to a group’s power. Henry Beguristain takes the nominal lead on “Waiting (Scenes from a Lonely Planet”) but quickly enough the tune becomes a duet. Then de la Osa takes a few lead lines. The two voices fit together seamlessly, conveying a joyousness that’s simply infectious. Those creamy harmonies show up again and again, most notably on “Salvage Yard.”

There’s so much going on in these songs that repeated listening is all but required. That said, the tunes aren’t overstuffed. It’s more that they’re intricately layered, but never in a fussy way. One can enjoy this music on a surface level if desired. The churning, r&b-flavored beats are propulsive; this is music for nodding along with, pumping one’s fist in the air or even singing along.

Rock, blues and soul all came from the American South, and though Aloud is L.A.-based, they seem to have absorbed the Memphis and Muscle Shoals vibe; it permeates their work, and not simply because of the horn charts. Even when such highbrow instruments as cellos are added (as on “Lovers of the Last Resort”), the feel still has more in common with stadium-sized rock ‘n’ roll.

In an age when music has been sliced and diced into infinite subgenres, Sprezzatura may just reaffirm the belief that rock is not dead after all. In the hands of such talented and passionate practitioners as Aloud, rock is indeed alive and well.