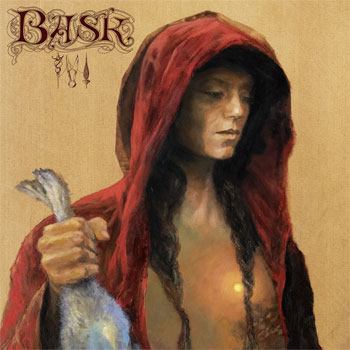 For a small city, Asheville is home to musicians representing a staggering array of musical styles. In an era that many see as post-album, post-rock and post-all other manner of things that make music special, it’s surprising that there’s a small but solid heavy rock scene in and around the city. A vivid testament to the vitality of that scene is the Heavy Mountain (stylized as HVY MTN) Festival, an annual showcase of local, regional and even national heavy rock acts that has taken place in Asheville for two years now. The prime mover behind that festival is Ray Worth, one of the two guitarists in Bask.

Calling Bask a local group does the quartet an injustice: though the band members live in Asheville, the group tours internationally. Bask released its debut album, American Hollow in 2014, following it up in 2017 with the deeply nuanced and textured (yet unrelentingly heavy) Ramble Beyond in 2017. Both albums show a Southern rock influence, but the band’s core sound is rooted in the thunderous, slow-burn metallic sounds of bands like Black Sabbath. Still, theirs is an accessible sound: while Bask’s music brings the hammer down, it’s far more melodic than, say, Sunn O))). And it’s free of the pretentiousness that sometimes infects works by otherwise impressive acts like the Sword.

While the title of Bask’s third album (III) isn’t especially creative, most everything else about the band’s latest really is. Released on Season of Mist, a label that’s home to powerfully aggressive acts from the U.S., Europe and Asia, III picks up where Ramble Beyond left off.

There’s a sense of drama and grandeur as the album opens with “Three White Feet.” Lead vocalist Zeb Camp sings in a warmly expressive tone that conveys a sense of melancholy, and the band provides hypnotic support. It’s a full two minutes before the instrumentalists shift gears form a dreamy, Porcupine Tree-styled arrangement into something more menacing and thunderous; the contrast between the two styles showcases them as complementary, and in doing so, makes “Three White Feet” serve as a tidy opening salvo that lays out Bask’s assets.

The quartet – guitarist Worth and Camp plus drummer Scott Middleton and bassist Jesse Van Note – makes effective use of (metaphorical) shadow and light; each of the songs on III displays more ideas than are routinely found withing a single song. The group seems to steer clear of progressive tropes like shifting time signatures, but in truth Bask uses those techniques – as well as others like the loud/quiet and fast/slow dynamics – in a way that feels natural and free of artifice.

Produced at Echo Mountain Studio by the band with Matt Bayles (whose credits include work behind the console for Mastodon and Pearl Jam), III has a sound that all but demands to be taken in via headphones. Failing that, large speakers with the volume turned way up are strongly advised. The multi-tracked vocals often have complex (yet always melodic) guitar lines or bone-crushing riffage behind them. The rhythm section never fails to bring the thunder when it’s called for, but nearly as often Middleton and Van Note show their skill at playing with a balance of precision and subtlety.

Taken as a whole, Bask’s III can be thought of as heavy music for listeners who might not even like the style; an approach firmly rooted in strong songwriting means that keen listeners might pick up subtle nods – intentional or subconscious – to Led Zeppelin, mid-period Beatles and other classic artists. But in the end, Bask has developed a sound all its own.

The Zeppelin influence is perhaps the easiest to spot: Bask’s lyrical approach has always drawn from myths and legends, or at least the ambiance that can go along with such stories. And while the band’s lyrics are intelligent (and free of the Tolkienesque meanderings that mar some progressive songwriting), it’s not strictly necessary to follow along with the words. Should they choose to do so –and it’s likely many will – listeners can allow themselves to be carried along on (and perhaps even overwhelmed by) the surging sonic wave that is Bask’s III.