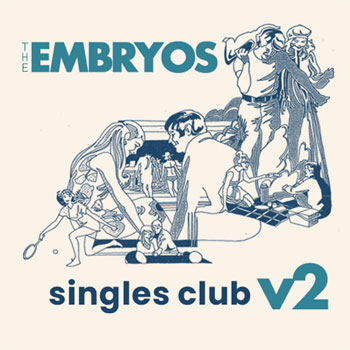 I was already predisposed toward liking this 45 before I heard it; The Embryos’ Open the Kimono (reviewed a few months back) is an instantly likable collection of chiming, catchy pop-rock. “Popular Character” has shades of Raspberries, Pilot and Matthew Sweet. So yeah, it falls loosely into the popwerpop subcategory. But if that’s not your preferred genre, don’t let the label dissuade you form cheking it out. The a-side has a memorable melody and a (very) short guitar solo, two of the necessary ingredients for a single (in my book, at least). The flip is “The City is Mine,” and it sounds like a b-side: moody, ever so slightly less in keeping with the group’s signature sound. It’s a gentle, contemplative song that simmers. Guest vocalist Shannon Roberts provides vocal support. There’s a vaguely 1967 sunshine pop feel to the tune. And while it’s an outlier in terms of the Embryos’ material, “The City is Mine” is Exhibit A in the argument that this is one versatile band whose musical vision extends beyond the confines of a certain oft-maligned genre.