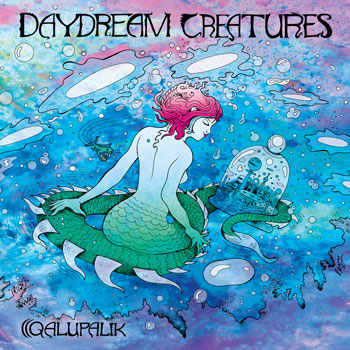 Look online for details about Daydream Creatures and you may come away with the impression that the female-fronted group plays high-energy rock ‘n’ roll. With performance photos featuring three of its members – Loren Carty, Jessica Korn and Brooke Randle – out front in matching mini-dresses and clutching electric instruments, it’s easy to make such an assumption. But the truth about this Asheville-based group is far more fascinating and nuanced.

The title of the group’s quirkily-named debut album – Qalupalik – provides few clues, and the admittedly entrancing cover art (courtesy Asheville’s own Joshua Marc Levy) doesn’t really prepare the listener for the music contained on the enclosed disc. The group’s anthem-of-sorts, “Daydream Creatures” opens the album with wah-wah guitars and bubbling sounds that suggest a modern-day answer to the Beatles’ “Octopus’s Garden.” But when the harmony lead vocals come in, it’s clear that Daydream Creatures plan to take listeners on a very different musical trip.

But in some ways, the vaguely nautical themed “Daydream Creatures” is a red herring: “Meta Guy” showcases the group’s ensemble vocal style, one that owes a debt to classic vocal teams like WWII-era sensations the Andrews Sisters and – somewhat more recently – the Roches. There’s a western swing sensibility to the vocal arrangements, and playful wordsmithing shows itself in both the lyrics and the tune’s punning title. Instrumental backing that’s in turns rocking and countrified further confounds anyone trying to pigeonhole exactly what it is that this band is doing, but it’s a happy confusion.

The torchy “Guitars & Memories” has elements of country and western too, but the trombone/sax/trumpet section (and Hammond organ solo) give the whole song a Memphian Stax/Volt feel. The tune’s chord progression vaguely recalls the Rolling Stones’ “Wild Horses,” but the soulful vocals are miles away from Mick Jagger’s style.

“All Night Long” suggests a bossa nova influence filtered through some old Rickie Lee Jones records, with a Cuban jazz feel applied to a tantalizingly brief piano solo. The understated yet emotionally charged ballad “Good Girl” is the most overtly country-leaning tracks on the disc; a series of inventive tempo shifts add interest to an already fine number.

“Locomotion” (not the Little Eva classic memorably covered by Grand Funk Railroad) is a smoldering rock tune that provides yet another opportunity to highlight Daydream Creatures’ impressive vocal skills. But the band (working with producer and multi-instrumentalist Kevin Harvey) never overdoes it; when the harmonies show up, they belong; they add to the texture but never overwhelm the song.

The Fender Rhodes that introduces “Your Lips” provides just the right late-night, closing-up-the-tavern ambiance for the Patsy Cline-styled romantic number. “One More Night” is a dark mid-tempo number that makes intelligent use of the sonic contrast between solo and harmony vocals. Another exemplar of understated clever wordplay, “You Let Me Let You” is the most deeply nuanced track on Qalupalik; running nearly nine minutes, the song allows Carty and Korn to explore the textural range of their voices – nasty one moment, soothing the next. Brooke Randle’s straightforward and simple yet soaring lead guitar takes its turn in the spotlight as well.

“Queen of Hearts” continues the album’s string of contemplative melodies; Korn reaches effortlessly into the lower end of her vocal range. Toward the song’s end, the band rocks out Neil Young style, but holds back from the edge of mayhem. The honky-tonk feel of “Bottle of Wine” brings listeners back to the vintage western swing of Qalupalik’s earlier tunes. Near the tune’s end, the band – and the vocal harmonies – seem to be falling apart; it’s a delightful left-turn that makes perfect sense within the context of the song.

Qalupalik ends as it began, with a brief reprise of the group’s theme. The announcer mellifluously gives thanks to the listeners, giving way for the vocal ensemble to trill its way toward the song’s (and the album’s) sonic maelstrom, psychedelic-tinged conclusion. But what to call that which we’ve just experienced? In the end it’s best to forget about summing up Daydream Creatures’ music into a few words. The music and the harmonies will tell us everything we need to know.