A Look Back at Crowded House’s ‘Temple of Low Men’ 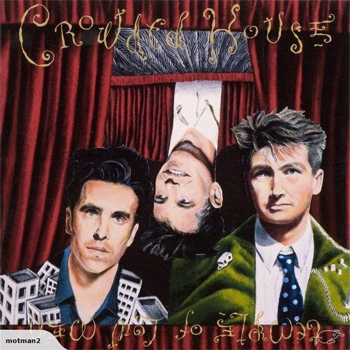 In April 1977, Neil Finn joined Split Enz, a New Zealand/Australian band co-founded nearly five years earlier by older brother Tim. Though he hadn’t yet reached his 18th birthday, Neil Finn quickly set about developing his skills as a guitarist, vocalist and songwriter. He wouldn’t write any of the music on 1977’s Dizrhythmia, by the time of Frenzy (1979) he had written two songs with brother Tim. And when True Colours was released in 1980, three of the album’s eleven tracks were solely composed by Neil, and one of them “I Got You,” would earn Split Enz its first international hit single.

With each successive album – 1981’s Waiata (released in the Australasia as Corroborree), Time and Tide from 1982 and 1983’s Conflicting Emotions – Neil placed more and more of his original songs on the records, shifting (unintentionally or not) the dynamic and creative center of the band. By June 1984 Tim Finn had left the group.

Suddenly finding himself the leader of a group that now included none of its original members (but most of the musicians responsible for the band’s most successful work), Neil soldiered on, making a final studio album pointedly titled See Ya Round. Not even released in the U.S., See Ya Round nonetheless contained some excellent songs, most notably a Finn original called “I Walk Away.” Split Enz – with Tim Finn briefly back in tow – mounted a farewell tour, documented on the 2LP live set from 1985, The Living Enz – and called it a day (they would subsequently reunite many times for special events, but never worked in the studio again as as Split Enz).

Neil Finn soon formed a new band, originally called the Mullanes (after his middle name). By the time of making its self-titled debut album (released summer 1986), the band was calling itself Crowded House and included Finn, bassist Nick Seymour and Split Enz’s last drummer, Paul Hester. Crowded House was a smash hit worldwide, going to #12 in the U.S. and #3 in New Zealand, and #1 in Australia.

But it would be a full two years before Crowded House released a follow-up album. When it did, the resulting album, Temple of Low Men revealed itself as a much deeper and more mature collection of songs, albeit one rife with melancholy, regret and sadness. Released three decades ago this summer, Temple of Low Men spawned six singles (the album only had ten songs on it to begin with) and earned rave reviews from most critics, but in the United States it sold in much lesser numbers than its predecessor.

The moody, minor-key ambience of Temple Low Men is in some ways less immediate than the upbeat aura of Crowded House songs like “Something So Strong” and the superior remake of “I Walk Away” (but not at all out of step with the ballad “Don’t Dream It’s Over”). Working again with producer Mitch Froom, the band delivers another ten songs with superb lyrics and ear-candy hooks and melodies. But there’s a lump-in-the-throat feel to many of the songs, filled as they are with raw emotional content – that renders the album intimidating on first listen.

Where Crowded House occasionally felt unfinished and slightly rushed, the songwriting, playing and production on Temple of Low Men showcases a group that has evolved significantly. The arrangements make full and intelligent use of keyboard textures (by Froom), and the presence of brother Tim Finn on guest harmony vocals brings together the best of the nascent group with the strongest qualities of Split Enz.

But where Split Enz was quirky, Temple of Low Men-era Crowded House is adult and serious, concerned with expressing Finn’s innermost thoughts and feelings. Even if the listener isn’t privy to what personal issues Finn was facing at home, songs like “Into Temptation” positively drip with an unsettling vibe that teeters right on the edge of emotional breakdown. “Kill Eye” shows a musically nastier, jagged side of Finn. Never before had Neil written a cache of such deeply personal (yet accessible) songs.

The dark tone of Temple of Low Men lightens only occasionally, on tracks like the live showstopper “Sister Madly,” with a gonzo guest lead guitar solo from Richard Thompson. But even on this song, Finn’s inner demons surface lyrically as he sings of finding something dark and sinister buried in his (metaphorical, one hopes) back yard.

The soaring “Never be the Same” sounds like a hit, but in fact it’s the only one of Temple of Low Men’s single releases not to chart. Perhaps that had something to do with Finn’s lyrics, opening with the line, “Don’t stand around / like friends at a funeral / eyes to the ground / it could have been you.” But for those who open themselves to Finn’s emotional honesty, the payoff is a wonderful song, one of Crowded House’s best.

Eerie sound effects introduce “In the Lowlands,” another standout tracks on an album with not a single weak song. Finn and his band mates have quickly developed a level of musical communication that results in beautifully nuanced songs that breathe, that provide intricate and textured backing for the words, but that never overwhelm the lyrics. Temple of Low Men is a near-perfect balance of music and lyrics.

Somehow it’s fitting that Crowded House’s second album closes with perhaps the most heartbreaking song in Neil Finn’s catalog. “Better Be Home Soon.” I recall the first time I heard the tune – the lead-off single from the album – as if it was yesterday; it stopped me in my tracks. “Better Be Home Soon” sad and beautiful at once, filled with regret and just a glimmer of hope; those characteristics make it a sharp distillation of all of the qualities found on Crowded House’s second album.

Crowded House would go on to record and release four more albums, going on hiatus and resuming operations multiple times. All of the band’s subsequent work – not to mention Neil Finn’s solo albums and collaborations with brother Tim – would be critically praised, and the band achieved superstardom most everywhere in the world (save the U.S., where they achieved milder success). But arguably Finn and his group never again dug into such a deep well of emotional honesty as on Temple of Low Men.