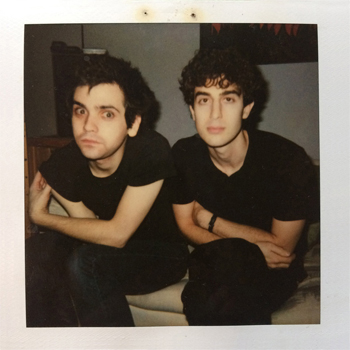 I think the publicist – however well-meaning he may be – was having a bit of fun when writing the one-sheet that accompanies promo copies of The Tables Turn Too Often. Sure, it’s useful to provide potential reviewers with some musical signposts, occasionally dropping of names in a RIYL (“promo-speak for “review if you like…”) kind of way. But this here one-sheet mentions Ray Davies, Bob Dylan, Curtis Mayfield, the Beach Boys, the Funk Brothers, Echo & the Bunnymen, Louis Ferdinance Céline (huh?), William Burroughs, Phil Spector (yikes and yikes), John Cassavettes, the Bee Gees, Malcolm X, Sergio Leone, Link Wray and Desmond Dekker, he of “the Israelite.”

Oh, and George Jones, the Ventures, the Velvet Underground and Diana Ross. Of course.

Sure, most of that is one grand-scale piss-take. But what about the music itself?

Brother Reverend is a Brooklyn-based indie duo, Keith Xenos and Fletcher Liegerot. The music on the record is a kind of creaky, cracked pop with ambitious undertones, aiming for a lo-fi answer to Todd Rundgren’s A Wizard/A True Star. It’s filled with gritty, streetwise playing applied to pop confection melodies. Really good stuff.

The album’s eclecticism is a poke in the eye to the listener who find themselves saying, “Hey, I really like this track.” The second cut, “Family Housing,” rocks melodically. But the tune that follows, “Anything New” is a high lonesome, three-quarter time country and western weeper with keening pedal steel. And it’s played straight (I think). And “Carry the Difference” has Wilsonian glockenspiel, patented Hal Blaine drum patterns and a ginchy melody full of Who-like power chords and more pedal steel … plus a lead vocal that may remind listeners of Lou Reed. Farther along, “Plot Twist” sounds like Neil Young and Crazy Horse.

Weird and sophisticated, but in a wholly unpretentious fashion, The Tables Turn Too Often is a delightful collection, a testament to the deep well of talent that exists on the indie fringes of the pop music landscape. A reviewer such as myself starts by reading the over-the-top one-sheet hype, and ends by listening to the album, shrugging good-naturedly and admitting, “Well, yeah.” Enthusiastically recommended.