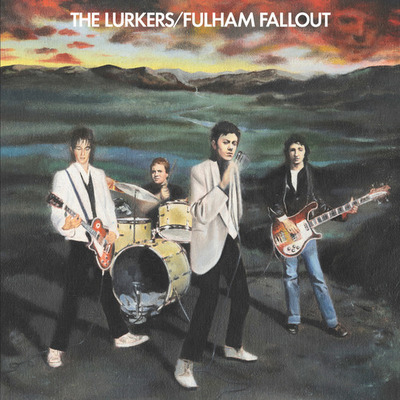 It’s been pointed out by numerous chroniclers of rock history that British punk of the late 1970s grew in large part (though not exclusively) out of the so-called “pub rock” scene. With the benefit of hindsight it’s not difficult to hear the connections and draw a line between pub rockers Ducks Deluxe and Brinsley Schwarz and the early releases from Nick Lowe, Elvis Costello and Graham Parker. Even the Clash grew out of the 1091ers, a pubbish-leaning outfit featuring Joe Strummer on guitar.

And in some ways, The Lurkers’ debut LP Fulham Fallout is a kind of missing link between glam/pub and punk/new wave. Released in June 1978, Fulham Fallout has all of the melodic content that characterized pub rock; it also has the speedy, pilled-up tempos and thrashy musical attack found in punk.

The Lurkers sometimes wore matching suits, and they had long hair. They took some sartorial cues from glam rockers like Sweet. But their shouted, repetitive tunes are minor classics of early punk. Fulham Fallout displays the uneasy detente between those two competing proclivities. As the first group signed to the soon-to-be influential Beggars Banquet label, the Lurkers really did bridge the outgoing era with the new one. And for their trouble, their long player actually charted (#357) on the UK album chart.

Reportedly, the band earned the tag/epithet “British Ramones.” True or not, the snottiness and exuberance in songs like “Hey You” (most definitely NOT the Pink Floyd song) draws upon the same creative wellspring. One can hear a similarity to the Damned, too, in tunes like “Shadow.” And the group’s bratty sense of humor shines through in a rewrite of a Phil Spector / Ellie Grenwich / Jeff Barry classic, given new lyrics and titled “Then I Kicked Her.”

classicThe band would go on to experience myriad personnel changes, releasing a dozen albums. Today, three members of the quartet that recorded Fulham Fallout play together as The Lurkers: God’s Lonely Men. The Record Store Day release on orange vinyl celebrates the 40th anniversary of this landmark — yet too often overlooked — album.