The Supersuckers: F-bombs and Devil Horns

Michael Jackson anointed himself King of Pop, so it’s no surprise that other artists would engage in similar hubris. After touring and recording for a few years, the Supersuckers branded themselves as The Greatest Rock and Roll Band in the World. And who’s to argue? Their mix of raw rock ‘n’ roll (bordering on punk) with outlaw country and western has won them fans across the globe.

The Supersuckers’ irreverent approach extends beyond their marketing slogan; it’s a key component of most all of their music. Their most recent studio album – 2015’s Holdin’ the Bag – offers prime examples. Though its title is shortened to fit on the label, the record’s standout track has this memorable refrain: “This life would be a whole lot better / If I didn’t have to share it with you.” Combining the snotty approach of punk lyrics with the sly wordplay of country yields songs like “High Tonight” and “Shut Your Face,” both from 2013’s Get the Hell. 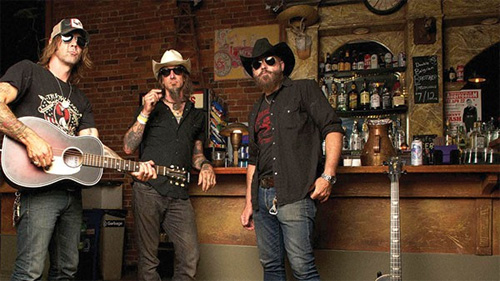 “I take what we do very seriously,” Supersuckers leader Eddie Spaghetti tells me. “That said, my point of view is usually humorous or ironic.” He cites an example. “When we first started throwing up the devil horns [fist raised in air with index and pinkie fingers extended upward] at our shows, it was kind of a joke. We were making fun of crappy heavy metal; in the ‘80s it was all bombastic and big and overblown and stupid. And then the line kind of got blurred. Now I actually think [the devil horns salute] celebrates all things that are evil and rock and roll at the same time.” He chuckles inwardly and adds, “And that’s what I like to do.”

The Supersuckers’ hybrid sound is nothing like the laid-back so-called country rock of Eagles. Spaghetti recalls his Arizona childhood. “I heard country music every day, and I thought I hated it. I wanted to hear big rock and roll songs.” But once he got older and started studying song craft, he discovered the timeless appeal of classic country. He says that adding those influences to the Supersuckers music “helps us take the expiration date off the band.”

Many Supersuckers songs include some of what George Carlin described as “seven words you can’t say on TV.” “We’re talking like we really talk,” Spaghetti explains. “And I think that makes our songs sound a lot more real.”

The Supersuckers strive to keep it real. “A band is defined by its limitations,” observes Spaghetti. “What it can’t do is just as important as what it can do. I try to work with my personal limitations, and just make it awesome.”

Since forming in 1988, the group has released ten studio albums and five live sets. The existence of the latter suggests that studio work isn’t the Supersuckers’ primary focus. “The records that we make have always kind of been an advertisement to get people to come to the live show,” Spaghetti says. “That’s where we do our business.” And the Supersuckers’ business is rocking.