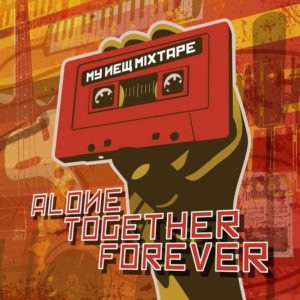 File next to: Owsley, Fountains of Wayne

Way back in 1968, in a gambit that was a combination poke-in-the-eye to their record company and artistic statement, the Turtles recorded Present the Battle of the Bands. The concept was deceptively simple: 12 song, each rendered in a different style, as if my a dozen separate musical entities. It’s an under-appreciated classic. Working mostly alone, Viginia-based Jarret Nicolay has crafted a similar (and simliarly effective) work in Alone Together Forever. His impossibly catchy tunes traverse a number of pop styles: powerpop, bubblegum, synthpop, singer-songwriter, pop-punk, and other radio-ready subgenres. Often as not, the songs tumble into one another, not unlike the approach used on Sloan‘s brilliant Commonwealth album from 2014. Nicolay’s sweet voice suits his catchy confections quite well, but even when he rocks out – as on the giddily crunchy “Selfie Stick” – he’s totally in command of the music, lyrics and arrangements. [Buy it HERE.]