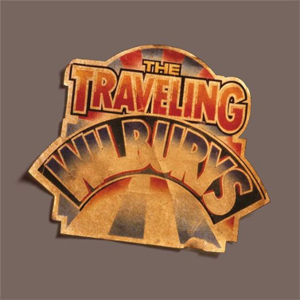 I’m not at all certain when the term supergroup first entered popular usage. I do know that it’s been badly misused more often than not: I recall seeing it used on magazine covers back when Duran Duran was all the rage: think of them what you will, but they were never a supergroup.

One of the first instances in which I recall seeing a variant of the term used – and even more helpfully, defined – was in the pages of an indispensable tome called Lillian Roxon’s Rock Encyclopedia. Writing about Cream not long after their farewell, Roxon wrote:

Elsewhere in the book – though I can’t find the passage at present – Roxon mentions the idea then growing in popularity among musicians of ad-hoc groups who would come together for a single creatively-fulfilling project and then continue on their separate paths. Of course that idea is nothing new to fans of jazz; think of how many immortal sessions Cannonball Adderley, Miles Davis and/or Bill Evans did for albums on which they weren’t top-billed. More than sidemen, less than marquee.

At its best, the whole concept was driven not by commercial concerns (“hey: let’s pair up these artists and we’ll have ourselves a blockbuster!”) but more by either aesthetic ones, or perhaps even by extra-musical ones: “I’d like to hang out with my friends … oh, and maybe make some music.” 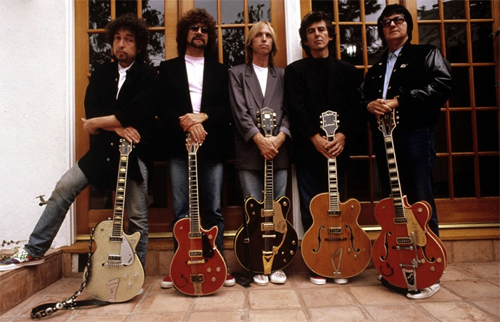 It’s that last scenario from which The Traveling Wilburys sprang. Each of the principals had worked with at least one of the others on some or other project, but never had all of them gathered together to do something. Perhaps it’s useful to think of the Wilburys as a kind of late-1980s answer to the fabled (and largely nonexistent) Million Dollar Quartet. As Rolling Stone wrote of them in 1988, The Traveling Wilburys are “… one of the few super groups actually deserving to be called either super or a group.”

The whole thing was brilliant in its off-the-cuff simplicity. A bunch of guys – all of whom happen to play guitar – would get together (primary though not exclusively with acoustic instruments), maybe write a few tunes together (or at least help each other with embryonic compositions), and make an album. It didn’t hurt at all that they all had at least some experience on the control room side of things, and in the cases of Jeff Lynne and George Harrison, a whole bunch of experience.

The project was free of artifice, and the whole thing had a decidedly unassuming air. There was a knowingly playful demeanor to the enterprise, a kind of we’re-mostly-just-messing-around vibe. They all used pseudonyms, even. One suspects that was Harrison’s idea: since the late 1960s he’d enjoyed billing himself under silly – and ever-changing – aliases: Hari Georgeson, L’Angelo Misterioso, George O’Hara-Smith, P. Roducer, Jai Raj Harisein, etc. They all called themselves Wilbury, making it plain that they saw themselves as a kind of musical band of brothers, equals all. 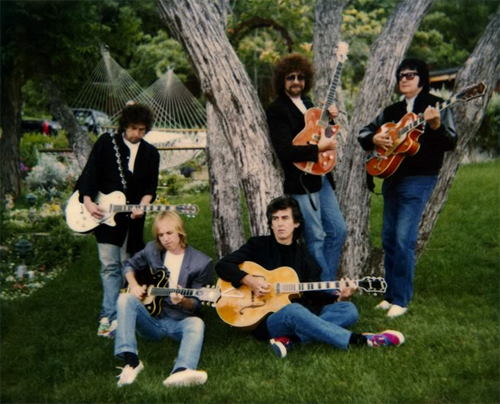 Sure, listening to it now, it sounds a bit like a Jeff Lynne concoction; for better and/or worse, few producers have a signature sound as distinctive as his (Todd Rundgren comes to mind; now he would have made in interesting Wilbury). And some of the players involved clearly had less to do with the whole thing than others (one can safely assume, for example, that the great Roy Orbison wasn’t running the show). But the music was solid, and did manage to pull together the somewhat disparate styles (Bob Dylan and Orbison don’t share a lot musically, for example) into a distinctive and reasonably cohesive whole.

But all that wasn’t really the point: they weren’t trying to do anything revolutionary or groundbreaking. Guys just wanna have fun, so to speak. And fun they had.

The group released but two albums: 1988’s Vol. 1 and 1990’s Vol. 3. (Of course there was no Vol. 2; that’s part of the goofy humor of the project.) Orbison had passed away prior to the recording of the second album, and he wasn’t replaced.

A new compilation titled The Traveling Wilburys Collection pairs the two albums (on CDs) and creates a kind of Vol. 2 by collecting all extant audiovisual representations of the Wilburys onto a DVD. That means five music videos (they got a good bit of airplay on MTV during the waning days of the cable channel’s music-focused programming) and a short documentary called The True History of the Traveling Wilburys. This package not only is all the Traveling Wilburys you could ever want or need, it’s also all there is. (Well, not quite. See postscript — bk) 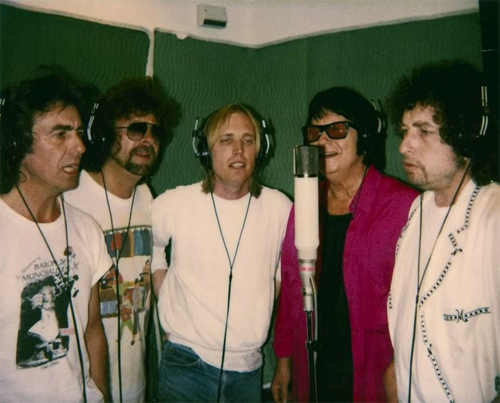 By that I mean that the few scattered tracks that didn’t make it onto either of the original albums are appended here as bonus tracks. What that means for the hardest of the hardcore fan is that those old cassette dubs of post-Beatles pirate/bootleg material can now be retired, since “Maxine” is included in this new set.

No, the second album isn’t quite as wonderful as the first, but then that’s to have been expected. Orbison’s absence doesn’t really explain it; the fact that the concept was by then familiar and had lost at least a measure of its novelty value probably had more to do with it. Also, most all of the participants were experiencing at least minor creative renaissances of their own, and perhaps they channeled their best material toward their own records (such as Tom Petty‘s Jeff Lynne-produced Full Moon Fever, to cite the readiest and best example).

And that was it. Two albums and out. The music they left behind from their relatively brief collaboration is some pretty timeless stuff, either thanks to or in spite of Lynne’s production fingerprints. While a very similar collection was released by Rhino back in 2007, the audiovisual components were accessible only via download. As such, this three-disc set is the definitive one, unless you’ve got the spare dosh for the 3LP set. But the vinyl version leaves out the DVD, adding instead some physical media odds and ends and some “extended mixes” which I cannot imagine anyone needing to hear more than once.

The liner notes are absurd and not especially informative, but that’s in keeping with the original concept anyway. The CD+DVD package is nicely designed and reasonably priced, and should fulfill all your Wilbury needs.

Postscript: As I was filing this new set away on my CD shelf, I noticed something I had completely forgotten: a 2CD bootleg (technically a pirate) set with the same title: Complete Collection. And as it happens, this set features a bunch of stuff that isn’t on this official set. It includes 7 demo tracks for the songs on Vol. 1; 3 of those extended versions available only on the vinyl version of the official set; several Roy Orbison tracks (both released and unreleased) featuring the Wilburys; several session outtakes; a rough mix of Vol. 3; and – most intriguingly – four tracks described as “outtakes from their third album.” So depending on one’s level of interest – and it would have to slip well into hardcore-level – there’s more out there for those who care to dig.