Album Review: The Miamis — We Deliver 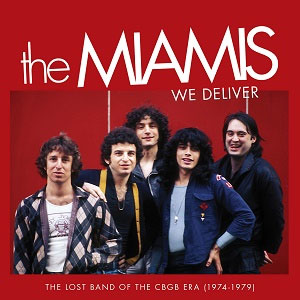 I hold Omnivore Recordings in the highest esteem: the collective taste of their prime movers is beyond reproach, and they’ve been responsible for some of the most thoughtful reissues of recent years. In an industry built on hype, Omnivore is rightly known as staying well above overselling the virtues of their releases.

So when I got my review copy of The Miamis‘ We Deliver and saw the album’s subtitle (“The Lost Band of the CBGB Era (1974-1979)”), I sat up and took notice. What had we here? Some unheard music on a par with New York Dolls, Television and the Ramones?

Well, not exactly. The Miamis might better be thought of as a kind of American Answer to Great Britain’s pub rock scene of roughly the same era. They had some good tunes, but they were rooted in a more mainstream (read: less adventurous, less angular, less sharp-edged) musical sensibility than those other NYC bands.

“We Deliver” is an ace tune, no doubt. “Cry Baby” reaches back to Brill Building-era pop for its inspiration. “I Want a Girlfriend” would please fans of The Records and/or The Rubinoos (which is to say, me), but listeners wandering into this disc expecting something challenging are almost sure to come away disappointed.

The second half of the disc is filled with well-recorded live tunes, and these show that the band had an energy that the studio recordings didn’t quite capture. It’s fair to say that these guys were a good bit tougher musically – perhaps even on a par with The Romantics – live, and if you saw them at CBGB, one supposes you would have know that.

Almost surely, you would have also been disappointed with their studio output. Happily, this collection rehabilitates the band through its inclusion of nine live tracks. Those tunes do betray a fascination with pre-rock’n’roll styles; listen to “Dada Mama” and see if Louis Prima doesn’t come to mind. The group’s close harmonies are a major asset as they deliver(!) originals that have no studio counterparts, “Elvis, Groucho and Bing” and – gasp – the Frank Sinatra chestnut, “That’s Life.”

There are shades of the era’s pop all over the songs; don’t be surprised if you find yourself thinking of Captain and Tennille while some of these songs play out. Not, as New Yorker Jerry Seinfeld might say, that there’s anything wrong with that: there’s always room for some solid, well-crafted pop rock. And on that score, this posthumous collection of studio, live and demo tracks from The Miamis truly does deliver.