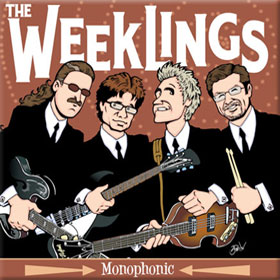 Beginning in the early 1980s out of their home base in Charlotte NC, The Spongetones offered up what was then a new and unique concept: new and original songs, written in the style of The Beatles. Though they’d later expand upon their sound and develop a style they could call their own, on early records (most notably the album Beat Music and the Torn Apart EP) The Spongetones cleverly wrote and performed songs that sounded like hidden gems from the Lennon/McCartney songwriting team.

These days The Spongetones gather for the occasional live gig, while their songwriting efforts are manifested in the steady output of two members, Jamie Hoover and Steve Stoeckel; they do business as Jamie & Steve.

So who remains to carry the banner taken up by The Spongetones (and, before them – and to varying degrees — The Bee Gees, Badfinger, Electric Light Orchestra, Klaatu, The Rutles, and for a moment, Utopia)? The answer seems to be The Weeklings.

Featuring (unsurprisingly enough) four guys who unashamedly describe their music as “Beatles-inspired power pop,” The Weeklings have released their twelve-track, self-titled debut. And while as a just-plain-listen it’s quite enjoyable, its contents deserve a bit of unpacking.

The disc kicks off with an original tune, “Little Tease,” that is packed to the breaking point with Beatleisms. Keen listeners will spot chord progressions from “I Saw Her Standing There,” as well as guitar licks and tambourine flourishes that call to mind specific moments in other Beatles tunes. But beyond that, “Little Tease” is a song worthy of the term Beatlesque. From the bop-shoo-wop baking vocals to the way that John “Rocky” Merjave slows down the tail-end of his guitar solo (a la George Harrison), it’s a true gem. I’ve lost track of how many times I’ve spun this tune in the last few days. And while it’s not the equal of the infectious opener, “Leave Me With My Pride” is a solid number in the 1964-65 Beatles mold. 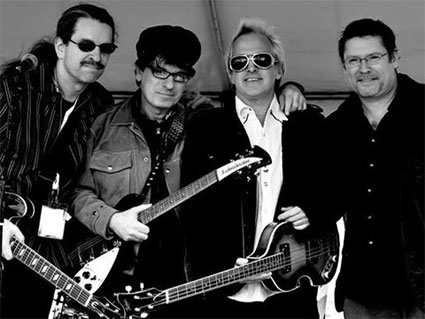 From here, things get really interesting. What, you might ask yourself, would it sound like if some songs that have previously existed only as Beatles demos (or versions tackled by other artists) were rendered in true Beatles style? The Weeklings are here to help answer that question. George Harrison’s early solo composition “You Know What to Do” is unique as one of the very few demos showcased on the Anthology series that had not leaked to rabid fans before release of the retrospective sets. Harrison’s solo performance of the tune is pleasant enough, but nothing special beyond its historical value. The Weeklings, however, give the song a full Beatles-style arrangement, and the results do indeed sound a lot like what the Beatles probably would have done with it.

“One and One is Two” was a lesser Lennon-McCartney original quickly written and given away to The Strangers with Mike Shannon. Most people will have never heard the song (nor anything by The Strangers, for that matter). The Weekings’ cover version re-imagines the tune with all the power and nuance of a Beatles version. What previously sounded like a throwaway now sounds like – if not a hit single – a very good album track circa The Beatles’ Second Album.

“I’m in Love” was a Lennon composition, though like everything from the Beatles days, it was credited to both him and Paul. The Fourmost did a decent enough version of it, and for their trouble were rewarded with a respectable #17 showing on the UK charts. (The Fourmosts’s first single, another Lennon/McCartney number called “Hello Little Girl,” reached #9 on the charts, but The Weeklings skipped that one, presumably because the fab four cut their own version at their ill-fated Decca audition.) Hardcore Beatles fans know “I’m in Love” from the poorly recorded informal Lennon demo version. (Aside: my own theory is that Lennon’s demo does not represent a 1963-4 recording; I am convinced that it’s a mid 1970s “self-cover” done as part of the work on the planned – but never completed – musical retrospective he was writing, a project called The Ballad of John & Yoko. But it’s just a theory.) The Weeklings’ version of “I’m in Love” does a good job of taking the tune to its logical proper end as a Beatles tune.

“It’s For You” was first cut by Cilla Black (UK #7, US #79), but it was also covered by Three Dog Night on their 1968 debut (and again on their 1969 Captured Live at the Forum LP). There’s only so much one could be expected to do with this slight number, and while The Weeklings’ version is more interesting than Black’s or Three Dog Night’s readings, it’s still no great shakes.

At this point in the proceedings (the beginning of the so-called “side two” of The Weeklings), the band shifts back to original compositions. “Mona Lisa” sounds like Beatles twice removed, or A Hard Day’s Night-era Beatles filtered through a Raspberries sensibility. In fact, if I told you that “Mona Lisa” was a Raspberries tune (it’s not), you might even believe me. “Come on come on” indeed. Bonus points for a guitar solo that reminds one of The Bobby Fuller Four‘s classic “I Fought the Law.”

“Breathing Underwater,” “If I Was in Love” and the slyly-titled “Oh! Darla” (get it?) showcase the softer, acoustic-leaning and more contemplative takes on The Weeklings’ Beatlesque songwriting. Taken together as a mini-suite, the tunes have the feel of a Spongetones tribute more than a Beatles pastiche.

The Weeklings wraps up with a pair of songs that The Beatles finished in the studio, but held back until Anthology. It’s fairly easy to understand why The Beatles didn’t see fit to release “If You’ve Got Trouble” and “That Means a Lot.” Neither is awful, but both suffer from some weaknesses, structurally and/or lyric-wise.

To their credit, The Weeklings do what they can with “If You’ve Got Trouble.” Taking note of Ringo Starr‘s frustrated plea in the Beatles’ version (“oh, rock on…anybody!”) The Weeklings try to up the ante musically. They achieve this by adding Revolver-era sonics: a bass line straight out of “Rain,” vocal treatments that recall “Tomorrow Never Knows,” and a fistful of cues from “Paperback Writer.” Moreover, they gamely rewrite the lyrics to dial back some of the original’s inanity. And while the overall result is an improvement, it all serves to highlight that, hey, “If You’ve Got Trouble” is basically some pretty weak stuff, Beatlewise.

Lifting the arrangement of “Till There Was You” straight off of Meet the Beatles, The Weeklings interpret “That Means a Lot” through that filter. And while stripping the semi-rock arrangement of The Beatles’ failed attempt is a good idea, we’re still left with one of the least-interesting tunes in the Beatles catalog.

It would be delightful to report that the clever endeavor that is The Weeklings ends on a strong note – something on the par with the exquisite “Little Tease,” or their reading of “One and One is Two” – but that’s not the case. As a project of originals in the style plus very well-thought-out re-imaginings of obscure Beatles material, The Weeklings is a modest success. One or two more cuts in the mold of “One and One is Two” and they might have had a near-classic. Instead it’s merely very good. Which – until the Spongetones decide to create new music, and that is unlikely – is well and good enough.