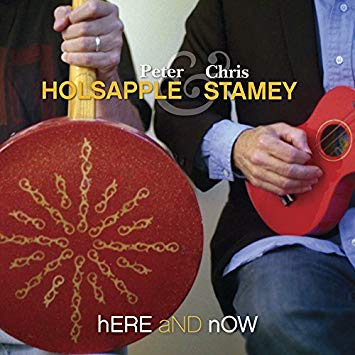 Once in awhile a record comes along that is so special, so singularly amazing, that it nearly defies criticism. The album hERE aND nOW by Peter Holsapple and Chris Stamey is such a disc.

Right out of the gate, Holsapple and Stamey deserve kudos for rescuing a beautiful track from undeserved obscurity. Family’s 1972 “My Friend the Sun” from the album Bandstand is transcendent. While the duo transposes the song down a few keys, they maintain (and arguably enhance) the song’s brilliance. Holsapple and Stamey keep enough of the signature acoustic guitar figures to remain true to the song, yet they breathe new life into it, making it truly their own. It’s an exemplar of song interpretation. Chord progressions don’t take the most obvious routes, a characteristic the track shares with the best of Holsapple/Stamey original work.

“Santa Monica” also deserves special attention. The arrangement answers the (ok, unasked) question: what would it sound like if Crosby, Stills and Nash joined forces with Neil Young’s Crazy Horse and produced a work of subtlety and enduring beauty? It really does feel like something off Everybody Knows This is Nowhere, with the guitars dialed down a bit, and with angelic harmonies. A stunner. And the solo really does channel ol’ Neil.

The title track is one of those songs that gets stuck in your head and won’t leave. Clever turns of phrase, that perfect mid-tempo arrangement that’s perfect for slow dancing and singing along, and shifting chords that elevate it above the realm of most of what passes for pop these days. Bonus points for twisting the lyrics to end successive lines with “here and now” and then “hearin’ now.” Brilliant.

“Early in the Morning” is a lovely tale of domestic bliss, yet it contains the slight sting in its lyrics: “I’m your cheap date / but I remember when I wasn’t.” It also breathes a bit of new life into the joke about reading the obituaries to see if you’re in them. And like all of Holsapple’s best work, it has rich musical textures, especially the beat change in the middle-eight.

If the album ended right there — four songs — it would approach desert island disc territory. But no. There’s nine more. And while they don’t all reach the heights of the opening salvo, they’re still good-to-great.

“Widescreen World” is another affair altogether. On this upbeat song, the band sounds uncannily like clever popsters They Might Be Giants, and the playful lyrics — name-checking places on the globe — serve to further the comparison. The cheesy (I mean that in a good way) Acetone organ and sound effects (plus handclaps and yeah-yeahs) work to make this the poppiest tune on the disc.

“Broken Record” slows things waaaay down. It’s a lovely enough tune, definitely bearing the hallmarks of Stamey; in some ways it wouldn’t seem out of place on one of Paul McCartney’s early albums like Wild Life or Red Rose Speedway. Put another way: nice but not ear candy like many other tracks on hERE aND nOW. But that’s a nearly impossible standard; such is the greatness of this special album.

The aptly-named instrumental “Ukulele” is cute and homespun, but even at under two minutes threatens to wear out its welcome. To riff on the Macca comparisons, it’s evocative of some of the brief snatches on the 1970 McCartney album.

“Begin Again” is a pastoral, reflective song brightened by emotive saxophone breaks by (of all people) Branford Marsalis and some subtle but well-placed strings.

The harmonies on “Bird on the Wing” provide the most direct connection to the duo’s work on their 1991 collaboration Mavericks. The subtle (there’s that word again) guitar picking conveys wistfulness, regret and resignation and a glimmer of hope. The guitar solo is a thing of beauty to rival the most tasteful solos of James Taylor.

“Some of the Parts” is a jaunty country-rock romp that reminds this listener of Mike Nesmith, with some off-kilter lyrical turns that bring TMBG to mind again. An uncredited gurgling organ solo adds interest.

“Song for Johnny Cash” is, in a word, beautiful. Like the best of George Harrison’s work, it’s a love song wherein the subject of affection is unclear: A woman? A higher power? Johnny Cash? Doesn’t matter. Great song, worthy of its name.

“Long Time Coming” moves back into Everlys territory. Like many of the tracks on hERE aND nOW, it’s packed full of emotion; a careful listen would perhaps enhance one’s mood: if you’re on the verge of tears, this would turn on the spigot.

“To be Loved” also closely follows the Everly Brothers approach, conjuring an image of a mythical prom night’s final song. Pedal steel, modulation of the final chorus…all familiar elements applied to a very classicist song structure, but an excellent example of the form for what it is.

“Tape Op Blues” ends things with a return to dB’s territory. The melody is pleasing, but the lyrics are the gem here: they’re not-to-be-missed, full of inside jokes and wry observations that musicians will enjoy.

Not one of the fourteen songs on the album breaks the five-minute mark; like the best pop music, they make their point — musically and/or lyrically — and then move on. That said, the disc bears — in fact benefits from — repeated listening.

hERE aND nOW is absolutely essential for fans of any number of genres. Please, oh please, guys: don’t make us wait another eighteen years for another album!