Pete Yorn: A Singer/songwriter for All Seasons 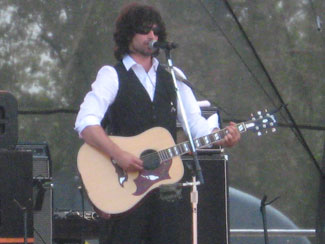 Pete Yorn collaborates because he wants to, not because he has to. A jack of all trades, Yorn–who got his start as a drummer–is proficient on all manner of instruments. So while he’s quite capable of doing a one-man show in the studio, like a select few others (Stevie Wonder, Paul McCartney, Lindsey Buckingham, Todd Rundgren), he calls on his friends to add their styles to the mix. Yorn admits that “there are some high profile and some low profile guests” on his latest disc Nightcrawler. Some of the more well-known names include drummer Dave Grohl (Nirvana, Foo Fighters) on “For Us” as well as Natalie Maines and Martie Maguire (Dixie Chicks) on “The Man.”

It’s nice for people to say nice things about my work. Of course all the negative reviews are completely wrong!
–Pete Yorn

This same egalitarian spirit holds true when it comes to producers; although competent behind the boards, Yorn enlisted no less than five co-producers (though only one per song) on the new disc. He explains that “I work so [solitarily] as a writer; I don’t have a set band that records with me. So I like to bring in different producers that I respect…to bounce ideas off, and to see what ideas they bring to the table.”

Pete is surprisingly grounded for someone who has come so far so quickly in the eyes of the critical establishment. On his positive reviews, he allows only that “it’s nice for people to say nice things about [my] work.” He does jokingly assert that “of course all the negative reviews are completely wrong.” Not that Yorn gets many negative reviews. In a relatively short time in the limelight–his debut musicforthemorningafter was released in 2001–Yorn has managed to make a name for himself across the landscape of popular music.

He’s turned out three studio albums, released a double-disc live set, and done a fair (and varied) amount of soundtrack work. He elaborates on the latter: “there are three types of things that can happen.

“The first one–which, to me is the easiest–is that you have a song already done, the record’s out, and someone will want it for a TV show or a movie. As-is. And you’re like, ‘great!’ There’s no additional work there.

“Then there’s number two. Someone will come to you and ask you to write a song for their movie [or TV show] specifically. I did that for Ed Burns back in the day; he was actually the first person to use a song of mine in a movie. The film was supposed to be called Long Time Nothing New, and he asked me to write a title track. Which I did. And it’s one of my favorite songs that I ever wrote. But someone at the studio had the bright idea to change the title of the film to No Looking Back. So (laughs) I’m stuck with this song where the whole chorus is ‘Long Time Nothing New.’ 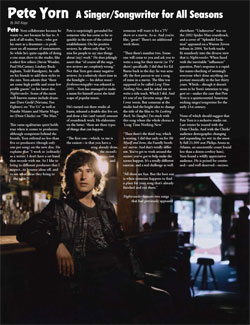 “All three are fun. But the best one is when someone happens to find a place for your song that’s already finished and out there.”

Nightcrawler features two songs that had previously appeared elsewhere: “Undercover” was on the 2002 Spider-Man soundtrack, and a cover of “Splendid Isolation” appeared on a Warren Zevon tribute in 2004. Yet both tracks fit seamlessly into the diverse stew that is Nightcrawler. When faced with the inevitable “influences” question, Pete’s response is a rapid-fire name-checking of seemingly everyone who’s done anything important musically in the last thirty years. Which –though it doesn’t seem to be Yorn’s intention to suggest so–makes the case that Pete Yorn is a quintessential American rocking singer/songwriter for the early 21st century.

None of which should suggest that Pete Yorn is a reclusive studio rat. Last winter he toured with the Dixie Chicks. And with the Chicks’ audience demographic changing and expanding (to wit: in the mostly-full 21,000 seat Philips Arena in Atlanta, an unscientific count found less than a dozen cowboy hats), Yorn found a wildly appreciative audience. He is poised for continued–and well-deserved–success.