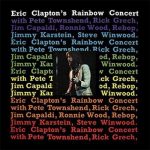 This feature originally appeared on BestClassicBands. As 1972 came to a close, guitarist Eric Clapton had been musically inactive for nearly two years. He enjoyed a burst of activity in 1969, a period in which he played live and in the studio with Blind Faith, John Lennon (documented on Live Peace in Toronto 1969) and
Read More
Every so often, I do a set of capsule reviews. Those short-take looks at CDs are a way of clearing my backlog. There’s so much good music out there – so much that I want to tell readers about – that it’s impossible to get to all of it. So the capsule reviews help a
Read More
Here’s a slightly unusual candidate for reissue: Eric Clapton‘s 1992 Unplugged album. To my knowledge, this massively commercially successful album has never gone out of print, which begs the question: why reissue it? To be fair, this 2014 reissue does include some bonus material. But first, let’s take a look at the original album. Filmed
Read More