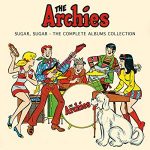 File next to: Bay City Rollers, 1910 Fruitgum Company, The Jackson 5 After his experience with The Monkees, pop impresario Don Kirshner made the calculated decision that his next project would be one in which the artists couldn’t rebel. Thus was born The Archies, a cartoon group that only existed on television. Well, that’s not
Read More