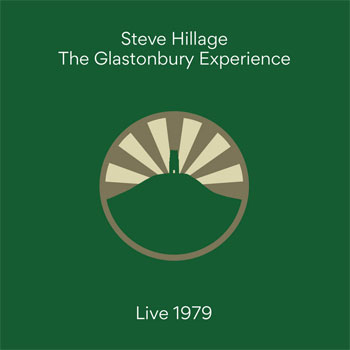 Steve Hillage is a beloved musician, and with good reason. His work with Khan, Arzachel, Uriel, Gong and System 7 has all been innovative, compelling and tuneful, with just the right degree of wigged-out hippie vibe. And that’s all true of his solo work as well, a catalog that features all sorts of lovely works, from 1976’s L (with Todd Rundgren and Utopia supporting him), Motivation, Green and Open among other notable highlights. While Hillage remains vital and productive to this day (be sure to check out my conversation with him in which he discusses ten albums that influenced him), his commercial peak as a solo artist came between the middle 1970s and the early ‘80s.

And it was squarely in the middle of that era when Hillage appeared at the famed Glastonbury Festival. (Well, he’s been several times, but a recording of this one is being released.) The Glastonbury Experience: Live 1979 captures most of that performance – 11 ½ songs – in good fidelity. Hillage and his band (featuring partner Miquette Giraudy on keys plus drummer Andy Anderson, Paul Francis on bass and Dave Stewart on guitar) are in fine form as they work through a set list that balances original material (“Octave Doctors,” “Unzipping the Zype”) and his own readings of songs he loves (Jimi Hendrix Experience’s “Are You Experienced,” Donovan’s “Hurdy Gurdy Man”).

Longtime Hillage aficionados may be surprised to note that George Harrison’s Beatles-era psych classic “It’s All Too Much” is not in the set. But the program flows nicely even without it, and the front-of-house mix (captured on cassette master) is surprisingly clear and crisp for a recording of its vintage.

If you enjoy Gong or Hillage (or, as I never fail to point out to younger music fans, if you appreciate the Hillage-inspired Ozric Tentacles), The Glastonbury Experience is highly recommended. It differs from (and is thus arguably preferential to) an actual Glastonbury experience in that Wellingtons are not required. The album’s book-style package is lovely as well. By the way, for those readers who’re in the UK, Hillage is on tour. Go see!