Since forming in 1992, North Carolina quartet Acoustic Syndicate has cultivated and developed a musical style that draws from a wide array of genres and styles; the band has never allowed itself to be hemmed in by preconceived notions about what is or is not bluegrass. Or Americana. Or rock, or any number of other styles, for that matter. Yet the group doesn’t take a studied or self-conscious approach to music-making; theirs is a wholly organic and natural creative process, one born of the band’s all-encompassing attitude toward their creative journey.

“We don’t specifically set out with any specific style in mind,” says Bryon McMurry. He sings and plays guitar and banjo in the group he co-founded three decades ago with brother Fitz (on drums and vocals) and cousin Steve McMurry (vocals, guitar, mandolin). The quartet is rounded out by bassist Jay Sanders; he’s Acoustic Syndicate’s “new guy,” having joined 25 years ago. 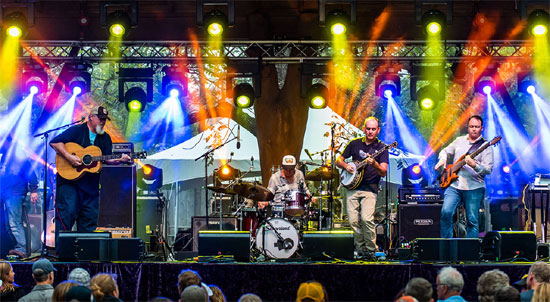 Acoustic Syndicate’s latest album, All in Time showcases the eclecticism that has been a hallmark of the group since the release of its self-titled debut album in 1996. Compelling original material composed primarily by Bryon or Steve McMurry coexists on All in Time with inspired and imaginative readings of songs by Willie Nelson (“Angel Flying Too Close to the Ground”), The Grateful Dead (“Bertha”) and even The Velvet Underground (Lou Reed’s iconic “Rock and Roll”).

When the McMurrys first put a band together in Boone, N.C., they called themselves the Mint Jubilee Bluegrass Band. But even then, their sensibilities were informed by a love of music by Bob Marley, Jaco Pastorius, Peter Gabriel and even progressive rock pioneers King Crimson. And when they launched Acoustic Syndicate, their aesthetic was rooted only loosely in bluegrass. “Right out of the gate, we had congas, upright bass, banjo, and guitar in the band,” says Bryon McMurry. “So we were already going down a different path.”

Mashing up musical genres is commonplace today, but when Acoustic Syndicate began, doing so was still a fairly radical notion. McMurry won’t take credit for launching an eclectic musical hybrid, but admits that his band was different. “We didn’t realize that we were as original as we were,” he says. “We were just playing these songs, and that’s the way they came out.”

Cross-genre musical excursions can take a variety of forms. Nashville band Hayseed Dixie recast Led Zeppelin’s “Black Dog” into the bluegrass idiom more than 15 years ago. But as creatively successful as that was, it was played – at least to some degree – for laughs. When Acoustic Syndicate interprets the VU’s rock classic, the result feels more natural, almost as if Lou Reed had intended the song to have a contemplative, subtle, semi-unplugged character. 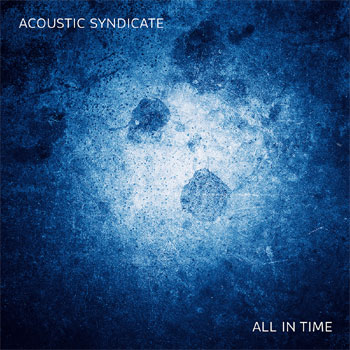 While he and his band mates are proud of their unique approach to music, Bryon McMurry admits that Acoustic Syndicate’s hard-to-pigeonhole character can have its drawbacks. “It could very well be a double-edged sword,” he observes. But the group doesn’t spend a lot of time thinking about how to market itself in today’s music landscape. The band has cultivated an ardent and dedicated following, one that appreciates the group’s willingness to trying things that – on paper, at least – might not ought to work.

That’s every bit as true for their original songs, like Bryon’s “Bright Lights.” The song’s distorted electric guitar textures might seem to belie the group’s name, yet it’s a classic exemplar of the Acoustic Syndicate sound. “I don’t know how to describe it,” McMurry says with a self-effacing chuckle. “The music that we make is what we’re feeling and thinking at the time, and it just finds its way to an audience.”

A dogged sense of positivity is another through-line that connects the group’s music across three decades and countless live performances. And it’s a foundational quality of All in Time, the band’s first album since 2013’s Rooftop Garden. “We hope that the music is something that will leave folks feeling a little bit better about the world, themselves and everybody around them,” McMurry says.

Meanwhile, Acoustic Syndicate continues to follow its members’ collective muse wherever it leads. “There are a couple of songs on All in Time that break drastically different from what we’ve been doing prior [to now],” McMurry concedes. With another chuckle, he quickly amends that statement. “Whether that’s good or bad, I’m not sure yet. But it feels good.”