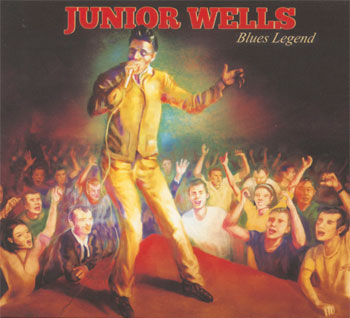 On first hearing of this release, my initial reaction was to shudder. While Cleopatra Records and its associated imprints have been responsible for many fine releases, there have been some notable exceptions. And those exceptions often come in the form of releases by legacy artists (i.e. dead ones), cases in which session tapes have been tarted up posthumously to – it must be said – gruesome-at-worst or pointless-at-best effect. And against the backdrop of Junior Wells having, um, backed Shirley King on her 2021 Cleopatra Records release (some 24 years after his death), I approached Blues Legend with more than a hint of trepidation: would this be an all-star [sic] outing featuring the drum work of Carmine Appice, maybe the vocal harmonies of Rob Grill?

I’m happy to report than none of that is the case here. Not only is Blues Legend free of gratuitous modern-day overdubbage, it’s a well-annotated collection of Wells recordings dating from 1960-62, a period during which the renowned blues vocalist/harmonica sensation was at the height of his powers.

In fact, all but one of these 32 tracks (there’s a bonus live cut from ‘66) predate Wells’ fame years. He didn’t cut an album until 1966, and his legendary collaborations with Buddy Guy didn’t start until ‘65. These tracks date from when Wells was essentially a singles artist.

With instrumental backing from some of the finest in the land (Otis Spann, Elmore James, Muddy Waters, Willie Dixon etc. etc.) these tracks find Junior Wells on fire. The recording quality/fidelity is truly fine on most of the tracks, and not-bad on the rest. And more importantly, the song selection is fantastic. The collection features well-known songs like “Hodo Man” and “Messin’ With the Kid” alongside lesser known (but equally superb) tunes. Wells wails (as it were) melodically on the instro workouts “Eagle Rock” and “Cha Cha Cha in Blue” as well as all sorts of other delightful cuts featuring his impassioned vocals.

The bonus track features a cover of Ray Charles’ immortal “What’s I Say,” and while it has little to do with the collection as a whole, it’s a spirited reading that’s well worth hearing. Dave Thompson’s brief liner note essay is a good read, and the packaging is classy. The cover art is a painting of Wells onstage, singing to a wildly enthusiastic (and, it should be noted, completely white) audience. And it’s worth pointing out a second time that the annotation for this set – who plays what, when the tracks were recorded – is deserving of high praise indeed.