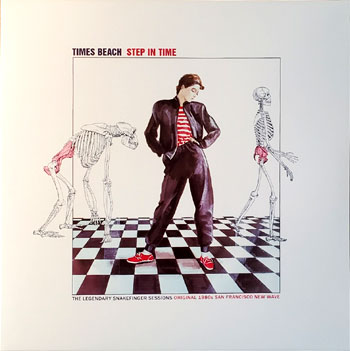 The creatively fertile arts community in the Bay Area – centered for a time around the San Francisco Arts Institute – informed the music scene. As I wrote about in my latest book, Disturbing the Peace: 415 Records and the Rise of New Wave, many of the region’s punk and new wave bands came out of that arts scene. Penelope Houston of the Avengers (not a 415 act, I should note) had been a student at SFAI. And members of other bands including The Mutants and Romeo Void counted SFAI alumni among their members as well.

But the arts influence wasn’t confined solely to punk and new wave artists. Times Beach could more accurately be described as “art pop.” The group cultivated a following in the Bay Area, playing the familiar places – Mabuhay Gardens, The Stone, Berkeley Square and so forth – and went so far as to record half an album’s worth of material with none other than Philip Lithman (aka Snakefinger) producing the sessions.

Those tapes were never released, at least not in any official capacity. But now, more than a third of a century later, those five tracks plus assorted other recordings have been compiled on a vinyl-only release titled Step in Time.

Quite a few musicians passed through the ranks of Times Beach in the band’s brief time in the spotlight. Perhaps the most well-known among them is keyboardist Eric Drew Feldman; these days he’s part of the Residents’ orbit.

But those musical touchstones don’t reveal much to hint at the sound of Times Beach. Arty for sure, the group had a cinematic, thrilling sound, one that owes a great deal to musical theater. Their character has hints of The Tubes, albeit without the latter’s smart-alecky comedy. The roaring, shimmering vibe of “Fear in the Western World” is the kind of thing that – one might have thought – would have found wider success in the era of MTV. The commanding vocals of (among others) one Mariana Trench(!) are stirring and anthemic. And Snakefinger’s production choices emphasize the group’s strengths.

Put another way, Times Beach was commercial, but in the best sense of the word. The songs scream out for music videos to accompany them: “Cool” combines a West Side Story aesthetic with an edgy, punk-vibed arrangement. The reggae character of “Fugitive” should have scored big in a musical landscape dominated by The Police. The male-female duet vocal approach is employed on most of these tracks, with (I think) guitarist Stēv LeGrand handling the male parts.

A dance-funk vibe is at the core of “Taking Orders,” a tune that’s halfway between Queen’s “Another One Bites the Dust” and The Tubes’ “Prime Time.” Ed Frantick’s guitar work is inventive and catchy on this track and throughout the album.

A KUSF interview with LeGrand and Trench wraps up the first side of the LP; the musicians discuss their backgrounds in theater but emphasize their focus upon music. The second side features miscellaneous tracks capturing the band live onstage at various Bay Area clubs. Though the fidelity of those tracks tends toward bootleg-esque, the lack of song duplication underscores the fact that Times Beach truly did have enough material for an album. And a solid one at that. Even with the dodgy audio quality, the arranging quality of the band shines through.

Taken as a whole, these 11 tracks provide an intriguing window into a band that truly deserved more success than it found. The band’s manager in 1983-84, Stephen M.H. Braitman is the man responsible for bringing this slice of Bay Area new wave (or whatever) to modern-day listeners. Even if you weren’t there at the Mab, this LP will take you back. Recommended.