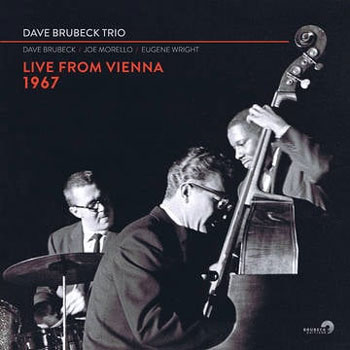 The latest in posthumous recordings courtesy of the Brubeck Editions series, Live from Vienna 1967 is a thrilling, you-are-there live recording featuring the pianist and superb sidemen Joe Morello on drums and upright bassist Eugene Wright.

It’s worth noting that the November 12, 1967 performance at the Konzerthaus in Vienna, Austria wasn’t supposed to feature a trio; saxohpnost Paul Desmond missed the gig. And as the liner notes (by Chris and Darius Brubeck) on this release explain, that put the pianist and band leader in a foul mood. Happily for listeners, that created more musical fire; Brubeck plays with an intensity that burns. The band leaps right into the fray with a thrilling reading of “St. Louis Blues,” and then never lets up. As fine a musician as Desmond was, he isn’t missed here at all; instead the recording – in superb fidelity, it should be noted – is an extra-special treat in part because of the rarity of releases by this configuration.

The three musicians play like their lives depend on it, leaning hard into the material. Not a note is wasted. The trio swings hard through Brubeck’s “One Moment Worth Years,” and the reading lasts some ten moments, with the rhythm section holding down the beat as the pianist lays down some atonal phrasing amid the copiously melodic bits. Even with a mere three musicians, the music seems to be going fast and slow all at once.

Stephen Foster’s classic “Swannee River” gets a reinvention here, with a wild, unbridled sound that draws from musical traditions far from the South. Yet it’s somehow true to the song’s spirit at the same time. The intensity finally lets up with “La Paloma Azul,” a familiar Brubeck number that’s no less lovely for its well-known character.

With lots of flourish, Brubeck launches into “Someday My Prince Will Come,” and as the arrangement unfolds, it showcases the trio’s ability to put across multiple musical textures within the confines of a single number. The set concludes with another well-loved tune, Billy Strayhorn’s “Take the ‘A’ Train.” Morello’s precise, varied and splashy percussion work conveys the kinetic character of the railroad, while Wright’s supple bass work supports the nonstop thrill ride that is Dave Brubeck’s work on the ivories. Start to finish, Live from Vienna 1967 is a magical musical tour de force, and an essential part of any serious Brubeck fan’s collection. (That said, everyone else should dig it, too.) Get it on vinyl.