Stile Antico: Leading without a Leader

What multiple Grammy award nominee Stile Antico does is unusual enough that it’s best to go right to the source for a description. “We’re a 12-voice ensemble specializing in Renaissance polyphony,” explains James Arthur, spokesperson and one of three bass vocalists in the London-based group. Stile Antico (pronounced STEE-lay an-TEE-co) was founded by a group of friends from Oxford and Cambridge who would get together for fun, singing during the between-term breaks at those universities. The group “went pro” in 2005, Arthur says, after winning the Audience Prize at the York Early Music Festival and landing a recording contract with classical label Harmonia Mundi.

The complex vocal polyphony of the group is applied primarily to works composed between the very late 15th century and the early years of the 17th century. Stile Antico features three singers in each of the broad voice types: soprano, alto, tenor and brass. That gives the ensemble a four-octave range. 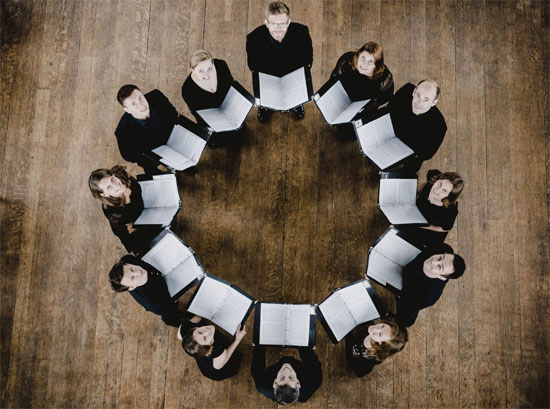 But what really sets the group apart from other vocal ensembles is its egalitarian character. “We don’t have a conductor,” Arthur explains. “Nor do we have a leader in any sense. We’re all individually and democratically involved in the artistic and business decisions. We’re a partnership of equals.”

Devising the individual vocal parts is a key component of that democratic process. Arthur explains that with 12 vocalists, the ensemble has the ability to double or triple-up some of the parts, displaying a richness that can’t be achieved any other way. Conversely, when Stile Antico performs later works (and modern compositions commissioned expressly for the ensemble), each of the dozen singers has his or her own unique vocal line.

Classical music is often thought of as rigid and highly structured, with musicians’ individual parts clearly delineated. “Mozart, for example, has written in a lot of directions and tempo markings,” Arthur says. “There’s not an awful lot you can mess around with.” But he emphasizes that when it comes to 16th century music, it’s a very different story. “There’s no direction marked in it at all,” Arthur says. “You’ve literally got [just] the dots on the page.” That provides a great deal of creative latitude for the vocalists of Stile Antico.

But with that freedom come challenges. Achieving consensus among a dozen highly creative individuals isn’t always easy. “Our rehearsal process is quite intensive,”Arthur admits, “because we each have a say – literally – about how we think each measure goes.” Not every member gets his or her way every time. “You can’t just say, ‘It’s my way or the highway,’” Arthur explains. “On the day of the concert, they just have to go along with it. Otherwise you’d derail the whole thing.”

And the arrangements are fluid, ever-evolving, Arthur says. “We will do two or three performances of a piece, and then we might come back to it and say, ‘Do you know what? This bit isn’t working! Let’s start again and undo it.’” For the leaderless Stile Antico, the collaborative process is ongoing.

Arthur says that there’s nothing magical about the number of vocalists in the group. “It’s rather arbitrary,” he admits with a chuckle. “It’s just what works for us.” He’s being modest, of course: having a dozen supremely accomplished singers covering a wide range allows Stile Antico to break down into smaller ensemble pieces for performances featuring as few as four vocalists. “That sort of breaks it up, making it more interesting for the audience as well,” he says.

The current lineup of Stile Antico includes five founding members, including three sisters: “a set of twins on the soprano line, and their sister Emma on the alto line,” Arthur says. Before the question can be raised, he smiles broadly and adds, “Probably the most-asked question after the concerts is, ‘Which ones are the sisters?’” (It’s Helen and Kate Ashby.)

The ensemble’s performances are exquisitely expressive, but they’re also quite subtle and understated. The members communicate among themselves wordlessly. “It’s down to a raised eyebrow or a slight nod of the head,” Arthur says. “We may seem a little introverted in performance, because we don’t project that much out to the audience.” Instead, listeners find themselves drawn into the intimate vocal interplay of the twelve singers; the end result is not unlike a single, twelve-voiced instrument.

At press time, the program for Stile Antico’s April 28, 2022 performance at Brevard Music Center was still being finalized. But James Arthur provides a tidy description of what concertgoers can expect. “A very relaxing evening,” he says. The performance employs the human voice to explore color, tonal contrast and dynamic contrast. “Someone coming fresh to us would be able to shut their eyes and wallow in their thoughts,” he says, adding with a smile, “and then come away totally zoned out.”