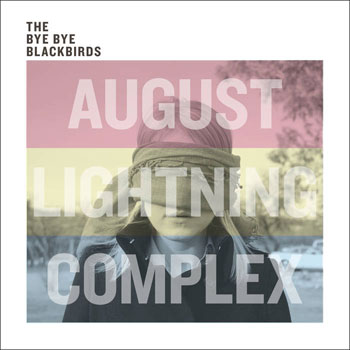 A new record from The Bye Bye Blackbirds is always welcome. Songwriter and guitarist Bradley Skaught is a songwriter who bends classic songwriting structure to his personal needs. Even though it has a title that sounds like something Robert Pollard might come up with, August Lightning Complex is another winning set of songs in a timeless style.

The oddly-titled opener, “Want Show as Young” has a subtly country flavor, but it’s only “country” in the way that some of Pete Ham and Tom Evans’ original songs for Badfingner were country. It’s more of a feeling than a sound, and it’s effective.

Not to fixate overly on that first track, but it is representative of the qualities that make the group special. Subtle brass works its way into the mix, providing another sonic connection to Badfinger. In this case, late-period classic Badfinger circa Wish You Were Here.

That bit of twang figures into the more rocking numbers, as well, but never to the point of leading anyone to mistake August Lightning Complex as Americana (or alt-country, if that term remains in use anywhere). It’s really heartland rock, even though Skaught is based in the Bay Area.

Even a shortish review of this album would be irresponsible if it didn’t shine a metaphorical light on the backing vocals of Kelly Atkins. Her work – sometimes singing in a kind of overlapping call-and-response fashion, other time in harmony with Skaught – is beautiful and obviously heartfelt. And it’s one of this album’s chief virtues.

And as fine a song as “We Got Lost” truly is, its reprise takes the tune into the stratosphere. Fans of powerpop will dig the album as a whole, but they might find “Favorite Stars” a special treat. And while you might thnk that a nine-minutes-plus song on such a pop-leaning album would be out of character, it fits wonderfully: “Marching” is hypnotic and alluring.

The interlocking guitar figures in “Out on the Waves” do in fact provide a musical metaphor for a roiling ocean. And that kind of subtle touch is a hallmark of Skaught’s writing. His songs are often more complex and multilayered than they at first seem. That’s an impressive characteristic, and what it means is that The Bye Bye Blackbirds’ music can be enjoyed on multiple levels. You can go about your business and let it provide a soundtrack; it’s very well-suited ofr that. But – -and more importantly – August Lightning Complex is the kind of record that you can spend time with, time getting to know its intricacies. And the record rewards that endeavor.

Recommended, but I suspected that going in.