The ‘British Invasion Years’ Are Now

There’s an old saying – attribution unknown – that asserts, “if you remember the ‘60, you weren’t really there.” But a quartet of musicians from Edison, New Jersey does remember. And they distill those memories into a thrilling night of music, packing dozens of songs into a two-hour performance under the banner The British Invasion Years.

The band traces its origin to the late 1980s. Co-founders Lee Scott Howard and Bobby M were playing restaurants and bars as a duo, but neither felt creatively fulfilled. “We realized that wasn’t our future,” says Bobby. “We felt we had more to offer; we wanted to do something special.”

He notes that simply playing a list of popular songs wasn’t going to scratch their creative itch. “We wanted to develop something that was more that just getting onstage and playing a bunch of cover songs, with no rhyme or reason as to why we’re playing them.” Both men felt a strong affinity toward the music of their youth, the pop music of the 1960s. 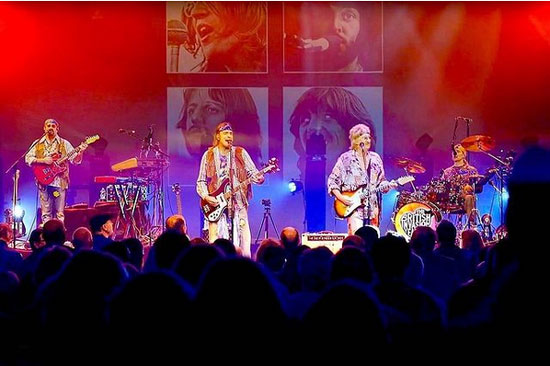 So the duo devised an evening of music that would do more than entertain, creating a show with a natural flow and narrative. At first, the set list focused on the so-called British Invasion (in England they call it the Beat Era). “The Beatles kicked open the door,” says Lee. Spearheaded by the Liverpool group’s 1964 visit to America, a musical movement opened the floodgates to all manner of sensational musical artists. From The Rolling Stones to Petula Clark, from Freddie and the Dreamers to the Kinks, and on and on, there was a wealth of great music from which to draw.

“But as we were researching,” says Lee, “we noted that there was a lot of great music on the American side, too.” Songs by the Monkees, Neil Diamond, Steppenwolf and others are beloved by the ‘60s generation and younger fans alike. So a British Invasion Years concert opens with pop music from England, segueing seamlessly into selections from American acts, and then wraps back up with late-period Beatles circa 1969’s Abbey Road album.

The evening is tightly programmed. “We do 35 to 40 songs each night,” says Bobby, pointing out that the rock and music from the ‘60s often takes the form of three-minute songs. “So,” he says with a laugh, “you can get a lot of songs into two hours.”

The presentation is squarely focused on the music, but accompanying visuals add to the overall feel. “Images of some of the bands will appear,” Lee says, “along with other visuals that go along with the songs: fashion, style, toys, television shows.” He notes that audience members recall those things very fondly, saying, “I almost forgot about that!” Younger audiences relate to the images, too. “They’ll say, ‘We’ve heard that song in a commercial,’ or ‘We played that song on Beatles Rock Band.’”

Even with a streamlined, choreographed show that includes costume changes, there’s room for a bit of spontaneity. “We might even take time to say, ‘Here’s a song by the Zombies,’” laughs Bobby. But a British Invasion Years concert is really about the music: “When one song ends, we’re rolling right into the next one,” he says. And while the varied and rapid-fire set list is demanding, he and his band mates love doing it. “You’ve got to be physically and mentally ready,” Bobby says. “But we’re well-rehearsed and used to it. It’s not a problem.”

Lee says that the show is interactive. “Everything we do is about the audience,” he emphasizes. “When they’re smiling, laughing and singing along, that’s the biggest measure of success. Because we know we’re doing something right.”

Bobby says that a British Invasion Years show is an opportunity for concertgoers to get their mind off of heavier things for a couple of hours. “You go back in time, and there’s nothing to think about other than the joy of the music, peace and love,” he enthuses.

Many concert dates were postponed and rescheduled more than once because of the pandemic. Now in 2022, the group is enthusiastic to get the show back on the road. Bobby looks forward to seeing audience members with nostalgic tears in their eyes; that’s something that happens a lot during the band’s performances. He says that the band members’ goal is to come off stage at the end of a show being able to say to one another, “We did our job tonight: to get people to have a good time.”