Recently, I interviewed Hipgnosis co-founder Aubrey Powell for a Goldmine magazine feature. That story can be found here. But our talk was so interesting – and got into so many area for which there wasn’t space in the magazine story – that I want to share more of it with you. Here’s the first of two parts. – bk 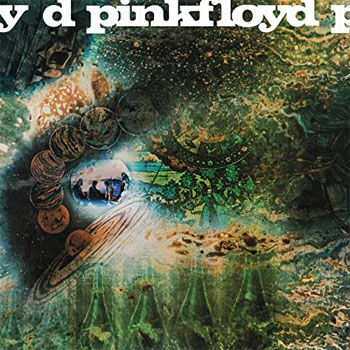 Bill Kopp: How many people were working at Hipgnosis?

Aubrey Powell: There were generally about 15-20 people who worked there: graphic designers, dark room assistants, groupies, and drug dealers. You know, it was just that kind of period of time when everybody gravitated. Because of where the studio was in Tin Pan Alley which was the center of the music industry – publishers and guitar shops and things like that – people would often just drop by. Peter Gabriel or Steve Marriott from Humble Pie would wander in, because we were all friends, you know. It was very much that sort of casual atmosphere. Great times.

Is there an album for which you didn’t do the design but that you wish you could’ve done?

Yes, I think there probably is, more importantly because of the band, I think. I really liked Strange Days by The Doors. I would’ve loved to have had a crack at working for them, because I think they were open to surrealism and interesting ideas. I think the other person who I would love to have worked for was Bob Dylan. Although I’ve met him, we never worked for him. I never have and, you know, some of his covers are quite interesting, but I never felt that he really had a really great album cover. I would’ve loved to have had a crack at that. You know, yeah, there are people who I would’ve liked to have worked for, but we didn’t. And I think mainly because I saw the potential of doing things for them that would’ve been interesting.

The work of Hipgnosis really set the standard for rock album covers, and it’s been very very influential. I’ve lost count of how many times I’ve seen album art by others and thought, “Well, it’s clear who they admire. It’s clear who they’re aspiring to emulate.” What do you think when you see work that has clearly been influenced/inspired/etc. by Hipgnosis?

Any album cover that I see that I feel has been influenced by Hipgnosis work: I’m incredibly flattered. I think that, you know, plagiarism is the greatest form of flattery. It often happens that I meet people – filmmakers, photographers, graphic designers who say, “I wouldn’t have started out if it wasn’t for you and looking at your pictures.” And I’m taken aback.

I think that the album cover was, if you like, number one a very socially important and culturally important sort of piece of paper that people identified with. And secondly, it was a gateway into what the band were thinking. Because, if you could think about this, there were only two or three TV companies at the time that showed music films or programs. There were very few magazines and newspapers related [to music]. We had about three in England: New Music Express, things like that. In America, you had Rolling Stone. Nowadays, you just press a button, you go onto YouTube, and you just see anybody you like from any stage. It wasn’t like that.

So the album cover became very much a gateway to the soul of the band. Often, some of these bands, and I think Led Zeppelin and Pink Floyd particularly, deliberately hid from publicity. You know, Pink Floyd were rarely interviewed or seen, and the same with Led Zeppelin. No one was allowed backstage; they were very private. So, they didn’t often speak much about what they were doing. Somehow, the album cover gave a sort of insight into where the band were at at the time.