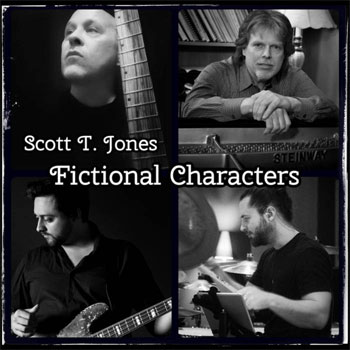 If your tastes run toward fusion – not the watered-down Weather Channel background music, but the muscular, virtuosic but melodic stuff – then you might well be frustrated with the current state of the form. Giants like Allan Holdsworth and Larry Coryell have left us, and it might seem there are relatively few in line to follow on pursuing such musical paths.

I’m happy to report a recent discovery that flies in the face of that pessimism. St. Louis-based Scott T. Jones has just released Fictional Characters, an album that serves u pall the fire, fury and finesse of classic fusion. Jones’ lyrical lead playing on the album’s eight cuts – including an ace reading of Holdsworth’s “Atavachron” is masterful and melodic. “The Long Night” hints at the style of U.K., but (in this case) the post-Holdsworth configuration of that band.

Romain Labaye’s thundering electric bass deserves special mention; like any good jazz/fusion bassist, he’s serving up lines that work both as musical anchors and countermelodies. Archibald Ligonnière’s drumming is nimble, precise and – most importantly – musical all on its own. And Steve hunt’s keyboard work – glistening acoustic piano, sinewy electronics – fits seamlessly into the mix, shining when it needs to, supporting the music the rest of the time. His blazing run on “Human Music” are thrilling.

And Jones’ howling guitar skronk on that same track demonstrates that he isn’t afraid to apply grit to the polish. “Shut Up and Dance” is hard funk-meets-prog-meets…whatever. This is one ensemble that successfully combines the edge of rock with the precision of jazz. The results deserve to be heard and appreciated by fans of either style. And if you like ‘em both, it’s essential.

Those who believe that fusion’s moment came and went decades ago need only to spend time with Fictional Characters to be set right.