The Allan Holdsworth Interview, Part One

Note: Sometime in 2016, I was contacted by a management representative for guitarist Allan Holdsworth. Plans called for the progressive/fusion guitarist’s body of work to be combined and reissued as a boxed set, with release scheduled for 2017. My name had been given to Holdsworth’s rep as someone who could recommend a good publicist to handle the project. I provided a couple of names.

Fast forward to March 3, 2017. The boxed set had been scheduled for release, and I had arranged a phone interview with Holdsworth. He was gracious and engaging during our fairly lengthy chat, but I got the clear impression that he was not physically well. He would pass away six weeks after our conversation, long before the interview would be published in Prog Magazine. What follows is an edited transcript of what would be one of the final interviews in which Allan Holdsworth would participate. As you’ll see in Part Four, we discussed what was planned as his “next” project. The status of that album remains unknown. – bk 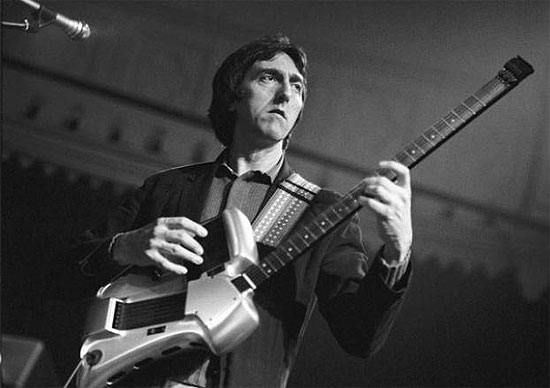 Allan Holdsworth was a towering figure in the world of progressive music. With his trademark legato style, he influenced a generation of musicians who would follow in his wake. And like many innovators, he watched as many of his admirers achieved greater commercial success than he would find. But those kinds of considerations have never been central to Holdsworth’s approach to music.

The early days of the Bradford, England born guitarist’s career saw him working in the Canterbury scene, as well as taking part in some work (sadly undocumented) with percussionist Jamie Muir, later a key member of Larks Tongues in Aspic-era King Crimson.

Holdsworth stayed busy and honed his craft playing guitar for Pierre Moerlen’s Gong, Tony Williams’ Lifetime, Soft Machine, Jean-Luc Ponty and others who explored the previously uncharted spaces in which jazz and rock intersected. Once his solo career got underway, he left England and settled in California. There he would spend less time lending his talents to outside projects, though he found time to play on albums by Stanley Clarke, Chad Wackerman, and take part in nearly a half dozen collaborative album projects. He’s also written three books on guitar technique.

Holdsworth didn’t consider the unauthorized 1976 LP Velvet Darkness part of his catalog, and preferred not to discuss it. But between 1982 and 2012, Holdsworth did record and release 12 solo albums (though 1983’s Road Games is technically an EP) for nearly as many labels. Though he continued to tour, 2001’s Flat Tire: Music for a Non-Existent Movie would be his final collection of material intended as an album. But now in 2017, Los Angeles-based independent label Manifesto Records has collected Holdsworth’s entire body of solo work into a box set with the rather presumptuous title, The Man Who Changed Guitar Forever!

He hated that title, by the way.

Your early influences were the ambitious end of classical music: Stravinsky, Bartok, and the like. When you were young, did pop music filter its way into your musical sensibility?

My dad was a piano player, a really good pianist. He had lots of records around; they were mostly jazz records. But you don’t wake up one day and sound like Django Reinhardt, so I decided to learn to play some of the pop music that I could play. And once I could, my interest in that music faded away. So pop music was just a starting point, although I still listen to all kinds of music.

Through the 1970s, you played with an impressive list of artists, each of whom was quite unique. Did you feel empowered to express your own musical ideas within the context of others’ work?

When I played with Tony Williams, he would never direct as to which way he wanted the music to go; he would kind of leave it up to me. Tony’d just say, “Okay, there’s the music; do your thing.” So it was relatively easy for me to find a way to inject my own personality into some of the music, even though it was composed by someone else. And I found that most everybody treated me the same way.

Was it your time with Jean-Luc Ponty that sparked your interest in playing the violin?

Oh no, no, it was just curiosity. I messed around with a lot of instruments; I played clarinet for awhile. I had borrowed saxophones from band mates in the past, just to get a feeling of how they work and the challenges of each; and it was like that with the violin. I got a violin, and then after that I did buy a viola. But the viola got lost in the shuffle when I moved; I don’t really know what happened to it.

It’s hard to lose a viola!