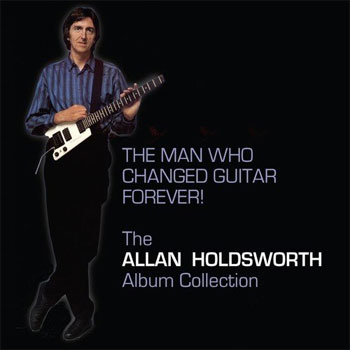 In the years that you worked with Jean-Luc Ponty – because he was essentially the lead instrumentalist – did you have to ease back on some of what you were doing to leave space for him?

Jean-Luc was great to work for; he left me alone pretty much as well. He didn’t give me any instructions. I liked the music, and I totally enjoyed playing with him.

But that wasn’t the case when you played with U.K. …

Not as much. There was less improvisation than I would have liked. It was more structured, not that there’s anything wrong with that. It was just that Bill [Bruford] and I were on one side of the fence, and Eddie [Jobson] and John [Wetton] were on the other. It wasn’t a personality thing, at least not for me; I liked all those guys. I just found U.K. a little bit too restrictive; I wasn’t making enough progress. It wasn’t assisting me to make progress in my own playing.

You didn’t make your solo debut I.O.U. until you were in your mid thirties. What spurred you to finally do it?

U.K. disbanded at that time, and I was still playing in Bill’s band. I’d just met drummer Gary Husband; we played together a little bit, and then I just kind of decided – the switch went on in my mind – “You know what? I’m just going to try this!” I just wanted to make the jump to play my own music. I had a reasonable amount of music written.

One of the unifying qualities of this new box set collection of 12 albums is the timeless nature of the music. For the most part, there’s nothing about, say I.O.U. that suggests that it was made nearly 20 years before Flat Tire. When you’re making an album, do you seek to to avoid sonic textures or production techniques that might make the record sound dated down the line?

No, it’s not a conscious effort. Some of it comes from the musicians who I played with, and their translation – or their interpretation – of my music. Some of those guys just had that quality; they didn’t necessarily have a sound [associated with] a specific point in time.

But at the same time, generally speaking, the newer the album the more I like it. For me, the box set is just a look back over time. There were bootlegs, and some albums had been discontinued for years, so we decided we wanted to put out my whole back catalog.

In the past, you’ve made a list of a half dozen or so albums called “Stuff I recorded but wish I did not.” Why did you characterize them that way?

It would depend on the particular instance, but I remember a couple of them that involved other guitar players. It was just a mixing thing: the other guitars would be three times the volume of mine! Stuff like that.

Early on in your solo career, you became very closely associated with the Synthaxe. What piqued your initial interest in that instrument?

When the Synthaxe came along, it opened the door to not only different textures and sounds that were unavailable on the guitar, but with the use of the breath control, I could do all the things that I wanted to do if I had been a horn player of some sort. I learned a lot from just playing that instrument. I still use it a lot in the studio; for the stuff I’m working on now, it has probably ended up on every track.

You’ve explored other technological innovations, and you’re involved with some development yourself. Have you played any newer things, like the Moog guitar?

Briefly, but it was a few years ago. But it was like a step backwards for me; if I have to go from the Synthaxe, the thing is going to have to be absolutely, incredibly remarkable for me to want to make a jump.