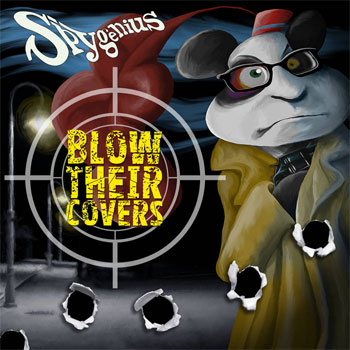 When a group – especially one with a proven track record of releasing high quality original material – appears with an album full of covers, it’s fair to wonder. Have they run out of ideas and/or material? Or do they have something of value to add to the interpretation of the songs of other artists?

Spygenius’ latest release, Blow Their Covers, suggests the latter. The group was most recently heard from with a superb double album, Man on the Sea. That album showcased the British foursome’s facility with songcraft, arrangement and…you get the idea. This new album focuses on covers, but Spygenius chooses to steer well clear of obvious choices. In fact unless you’re the hardest of hardcore music fiends, there re likely to be t least one or two tracks here that you’ll find wholly unknown.

A reading of Traffic’s early classic “Paper Sun” opens the record, and it sets the tone. The arrangement is familiar enough to anchor the song; if you know the original, you’ll recognize it here. But Spygenius add enough of their own character – subtle instrumental and vocal touches – to make it their own and thereby justify the existence of this new recording.

The band effectively rocks up songs that – great as they are – didn’t opt for a heavy vibe in their original form. The Monkees classic “Love is Only Sleeping” is a prime example. They play it fairly straight on another Monkees tune (“For Pete’s Sake”) but the tune is so good that no changes are really needed. Same’s true for a reading of Robyn Hitchcock’s “Queen of Eyes,” though in Spygenius’ eight hands, the tune leans even a little more in a rock direction than did the original.

Without further research into the original versions – and hey, I’ve got deadlines here – it’s hard to know exactly what Spygenius brings to the table on readings of “Please Stop Talkin,” “Murrumbidgee Whalers” or Peter (Fugs, Holy Modal Rounder) Stampfel’s “Griselda.” What I can tell you is that the songs sound good.

A cover of Squeeze’s “Is That Love” is pretty ace as well. But the undisputed high point of Blow Their Covers is a remake of a long-obscure Beatles track, “Step Inside Love.” Written (at least primarily) by Paul McCartney and first released by Cilla Black, it’s a fairly standard-issue Macca tune of the era (which is to say: better than what most other composers could come up with). The Beatles’s version circulated as a bootleg for decades, and eventually saw official release on the Anthology sets.

But Spygenius take the song to another level, with a multilayered arrangement that suggests how The Beatles might have tackled it had they cut it for Abbey Road. It soars, it dives, it swings. Brilliant.

Andi n a word, brilliant is the best way to describe Spygenius’ work overall. This 13-song collection shines a light on their strengths (save songwriting), and that’s enough. That said, I for one am ready for another album of original music from the group.