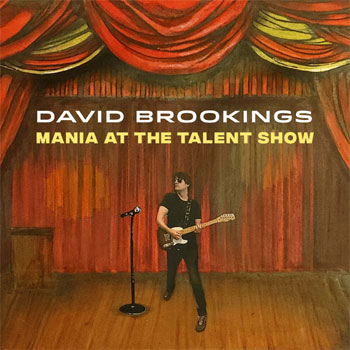 A quick bit of context here, if you don’t mind. I’ve been a fan of Brookings’ music for some years now, and have reviewed at least two of his albums (the 2016 release by David Brookings and the Average Lookings and Scorpio Monologue) as well as mentioning his work in the context of a number of Big Stir Singles compilations. For some reason, I got it in my head that his latest – Mania at the Talent Show – leaned in a twangy, Americana direction. For that reason (as long time readers of this online mag might expect) I was disinclined to be interested.

A friend* suggested that I might have got my signals crossed, as it were, and encouraged me to give the album another listen. Heeding that advice, I fished the CD out of the dumpster (Kidding! Kidding!) and popped it into my player.

Now, it’s unfair to expect an artist to deliver the same thing album after album (unless their band is called Oasis), but it’s reasonable to understand that when or if an artist stays far from their established style (see Richard X Heyman’s Tiers for a textbook example), many listeners may experience disappointment, even if the music is quite good.

Mania isn’t a left turn of that magnitude. In fact it’s largely consistent with Brookings’ established aesthetic: finely crafted pop songs with an emphasis on melody and accessible arrangements. It’s true that the opener “Hard Times” doesn’t rock hard, and that the second track, Keep it Real,” serves up more in the way of twang than one might expect from Brookings. In fact, on second listen, I think it’s that track that threw me off the course. Brookings affects a bit of a Southern accent, and the song’s arrangement is filled with ukuleles (they sound a bit like mandolins), slide guitars that sound like pedal steel, and lyrics to (sort of) match.

And tunes like “Ojai” lean in a more acoustic direction than some of what we’ve heard on past Brookings releases. But if one listens past those first few cuts, Mania at the Talent Show delivers the kind of textures that won this listener over some several years ago. “One of Us is Crazy (The Other One is Me)” might sport a title that suggests Today’s Modern Country™, but the song itself is a breezy, catchy number.

“Words Come Back to Haunt You” is a mid-tempo number with a heavy guitar lead at its center. And “Get Off (My Mind)” is wonderfully chiming pop that fits in well with the sounds of Brookings’ earlier releases. In fact, if I were to offer a mild criticism (hey, that’s kinda what I do), I might have sequenced the album with “Get Off” as the opening track, and placed the (slightly) twangy tunes mid-album.

“Women of L.A.” is more winning pop-rock with a subtle Beach Boys flavor and clever, amusing lyrics. “Magnolia” has a SoCal vibe with hints of Tom Petty and the Heartbreakers; never a bad thing, that. “Kill Shot” is Brookings at his best, with memorable melodies applied to really good songwriting and a careful (but not fussy) arrangement that serves the songs.

The live (or faux-live) title track is fun. Hints of twang crop up again – especially in the sonorous lead guitar break – but they don’t overwhelm. “Hide Your Crazy” is a rare minor-key excursion with some fascinating funk-centric keyboard textures. It’s a stylistic outlier on Mania, but in a way that works. The album wraps with “Mystery of Time,” a jangling bit of ear candy with some of the album’s tastiest lead guitar sounds. It’s easily among the album’s strongest tracks.

Verdict: On second listen, I will allow that Mania at the Talent Show may not, strictly speaking, be an Americana album. That said, hints of the style do make themselves known in a few prominent places, and listeners’ feelings about the record as a whole might be colored by that fact. Yet the qualities that have made David Brookings a musical force to be reckoned with are still very much at the center of his work.

* full disclosure: the artist himself.