The following feature was commissioned by a publication, but prior to its running, their management made an editorial decision to cut arts and entertainment coverage. I’ve rescued it from obscurity and share it here. — bk.

Ever since Deerhoof came together in San Francisco some 25 years ago, the band’s releases have tended to be slow burners. While none of the group’s nearly 20 albums has been pilloried by critics, new Deerhoof releases have sometimes been met initially with muted critical response.

Yet seemingly inevitably, once a Deerhoof record spent some time out in the world, critics would come around, offering effusive praise for the group’s effective synthesis of the experimental and the accessible. And in recent years, that slow-burn character seems to have dissipated: the band’s three-album volley in the pandemic era – 2020’s Future Teenage Cave Artists; the covers mashup Love-Lore; and Deerhoof’s latest, Actually, You Can – have all earned widespread positive notices right out of the gate. 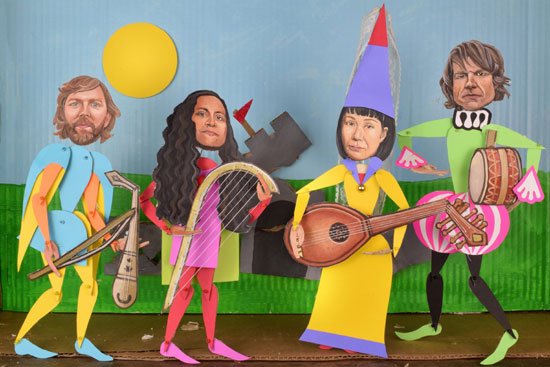 Founding member and drummer Greg Saunier laughs at the suggestion that his band’s albums take awhile to be understood and appreciated. He facetiously explains: “We’re heavily influenced by Stanley Kubrick, and he always got bad reviews. And then decades later, The Shining is the absolute pinnacle of the art form.” As is any given Deerhoof record, he jokes.

After his giggles subside, Saunier allows that there may be something to that phenomenon. “There are some people who like it riht away,” he emphasizes. “But I think our music is a little… confusing.” He suggests that Deerhoof’s DIY method – customarily working as a self-contained unit and without the involvement of an outside producer – can result in some dense music that takes time for listeners to unpack.

“Instead of making a record quickly by [booking] three days in a recording studio, we take a year and do it all ourselves,” Saunier says. “And with that can come a tendency to overwork, to overthink things. So it doesn’t surprise me at all that someone would be slightly puzzled by what they’re hearing.”

Conscious that his answer might put a negative spin on the situation, Saunier seeks to elaborate further. “Maybe it feels like a lot of information going by really quickly,” he says. “But the more you listen to it…” He trails off, leaving his statement unfinished and hanging in the air. As with Deerhoof’s music, it’s ultimately up to the listener to complete the thought, to fill in the blanks, making the end product that much more of a personal experience. 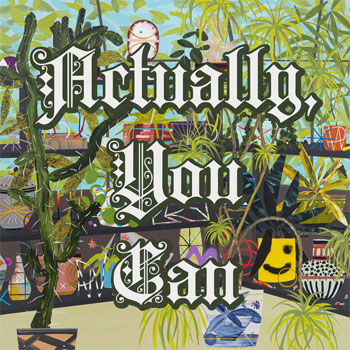 Saunier says that the insular working methods employed by him and his band mates – bassist and singer Satomi Matsuzaki plus guitarists John Dieterich and Ed Rodriguez – do give Deerhoof’s music its particular character. “There’s so much that the four of us know and have experienced in common that might not really be in common with anybody else,” he says. “We have our own musical language.”

Yet for all of Deerhoof’s experimental approaches to constructing music, there’s something approachable about their work. Still, Saunier is taken aback at the suggestion that Deerhoof’s music traffics in pop values. “That assumes that there are pre-existing rules of how to make hooky or poppy music,” he says. “And about how to make dissonant music.” He doesn’t believe that dissonance – a quality often found in Deerhoof’s music – undermines its potential commercial appeal.

“Pop music changes a lot,” Saunier emphasizes “It’s trendy: what makes something ‘commercial’ seems to be in constant flux.” Every artist, he says, is in a race to figure out what people are going to like six months from now.

Saunier pauses and backtracks again: not every artist. “Even if somebody had this secret that they could whisper to you of how to do commercially appealing music, we are the last people on Earth who’d be able to interpret – or understand or know or be able to implement – those rules,” he says.

Yet none of that means that Deerhoof is willfully difficult. Commenting on the denseness of the band’s music, Saunier insists that he’s “trying to get more hooks, not less. I’m trying to provide the consumer with more value.” He says that by having the guitars and bass play different melodies at the same time, he and his band mates aren’t trying to undermine the songs’ intrinsic melodic appeal. “No, “he insists. “We’re trying to quadruple the hookiness!”

In interviews around the release of last year’s Future Teenage Cave Artists, Saunier touted a soon-to-be-released sequel. That sequel is the semi-official Love-Lore, available for free on Deerhoof’s Bandcamp site. An inventive melding of songs from across the pop landscape and beyond, it provides a window of sorts into the melange of influences that inform Deerhoof’s original music. 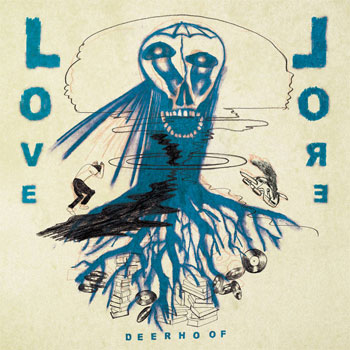 Cut live in the studio, Love-Lore is a dizzying musical travelogue through Deerhoof’s collective subconscious, featuring snippets of songs like The Beach Boys’ SMiLE-era classic “Wonderful” jammed up against pieces of Gary Numan, Sun Ra, Ornette Coleman, Voivod, Parliament, Paul Williams (“Rainbow Connection”) and too many others to count. It’s a wild ride, the kind of project other bands would be thrilled to release commercially.

But Love-Lore isn’t for sale; not exactly. It’s available as a name-your-price download from the band’s Bandcamp page. “It’s free because it’s all covers,” Saunier explains. “We didn’t want to mess with all the publishing headaches.” But calling Love-Lore a covers album does it an injustice; the song fragments are reprocessed into something new, something uniquely Deerhoof.

Saunier describes Love-Lore as “Music of all kinds of different genres from the ‘50s to the ‘80s, but just snippets of things: the bass line from this TV theme song, but with the melody from that modern classical piece.”

Deerhoof’s latest release, Actually, You Can was released digitally and on CD in October, with vinyl scheduled to follow in January. The band’s internal collaboration means that the character of that album – like all Deerhoof projects – only revealed itself during the process of creation. “We often start with a plan,” Saunier says. “But the idea becomes very confused when it runs up with actual songs or actual human beings. The process of making it reveals the flaws in one’s original manifesto.”

Saunier says that the path to completion sometimes seems fraught, but it always somehow works out in the end. “Three quarters of the way done making a record, it feels like a total mess,” he admits. “Like, ‘Do we even have a record here?’ But somehow it magically all starts to fall together. It’s as if there was a theme or a concept hiding in there all along, and we were searching and searching and couldn’t find it. Then, suddenly, it’s there, and it feels like magic.”