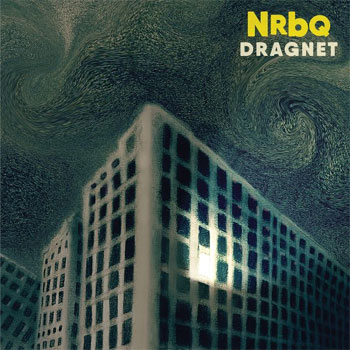 NRBQ is an American treasure. Founded in the mid ‘60s, the band has always transcended – smashed, even – genre boundaries. They’re as likely to be inspired by Sun Ra as they are to draw from rockabilly. The band has endured countless lineup changes, so many in fact that there’s a contingent that asserts that whatever current iteration of the group exists, it’s not the “real” NRBQ. For the purposes of this review, I’ll dismiss that argument: the current lineup – led by founding member Terry Adams – has been together for more than five years, with three-fourths of the lineup stable for a decade now.

Superb musicianship often brings with it a kind of showiness, a predilection toward look-at-me. A hallmark of NRBQ since its earlier days is a refreshing freedom form that approach. Their songwriting has always been pretty solid as well, and Dragnet is no exception on either of those counts. The characteristically silly “Where’s My Pebble?” may not make much sense, but it’s a fun tune. The winsome “I Like Her so Much” is a peppier answer to the kind of song Marshall Crenshaw showcased on his debut.

The countrified “Memo Song” is sweet and simple, but you’ll be forgiven for noticing that John Perrin’s vocal bears a passing resemblance to a green frog puppet with ping-pong balls for eyes. Adam’s effects-processed electric piano on “Miss Goody Two Shoes” is more than a novelty. And he carves out a delightful slice of British-style Summer of Love pop for “You Can’t Change People.”

The title track is, in fact, the theme from the 1960s TV drama. In NRBQ’s hands, it kind swings. “The Moon and Other Things” is written by bassist Casey McDonough, and the lovely tune is quite possibly the best track on Dragnet. Scott Ligon’s “That Makes Me a Fool” sounds like it was written (and arranged and recorded) 70 years ago, and that’s meant as high praise indeed.

The thing is, there really isn’t an easily definable NRBQ sound; the band’s hallmark is its defiantly eclectic nature, and its unprepossessing attitude. Tunefulness is always in supply, but if consistency in terms of style is important to you, Dragnet might frustrate somewhat. For the rest of us, we’re simply glad that five decades and counting, NRBQ is still going strong.