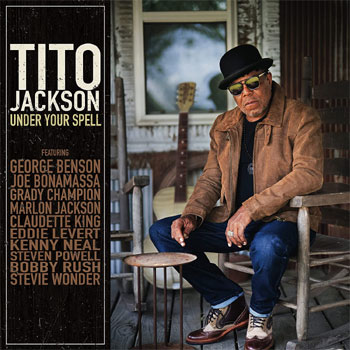 If you’re any of the offspring of Joe Jackson of Gary, Indiana, your surname carries with it a great deal of baggage. The stunningly talented Jackson 5 (later The Jacksons) racked up three Grammy nominations, induction into the Rock and Roll Hall of Fame, the Vocal Group Hall of Fame and – three times – the Grammy Hall of Fame. To venture beyond that framework and launch a solo career means coming face to face with the high expectations associated with the Jackson name.

Happily, vocalist, lead guitarist and second-eldest son Tito Jackson has the goods. Tito embarked upon a solo career in 2003; his work outside The Jacksons has seen him expanding upon his pop music foundation to incorporate elements of jazz and blues. His first solo release, Tito Time, appeared in 2016. Now in 2021, he returns with Under Your Spell, a lively and assured immersion into the blues.

From its cover graphics on down to the music within, Under Your Spell is characterized by its proliferation of guest artists. Tito is joined by several top-tier names in blues, but he’s never overshadowed; his innate talent shines through.

“Love One Another” features the distinctive chromatic harp work of Stevie Wonder; his harp punctuates the song’s phrases, sometimes sparring with the lead vocals. Those vocals are shared – sometimes in unison, other times in harmony, occasionally via solo turns – between Tito, Marlon Jackson, Kenny Neal and blues giant Bobby Rush.

The swinging blues of “I Like It” finds the spotlight shining most brightly on Tito, working here without guest artists. In contrast, the funky, riff-heavy title track features some searing slide guitar work from Joe Bonamassa.

B.B. King released “Rock Me Baby” in 1964; daughter Claudette King joins in on growling vocals for Tito’s remake. The song’s arrangement is a bit stiff, but the committed vocals and George Benson’s tasteful extended lead work make it worthwhile. With Michael Lee and Tito taking lead turns as well, “Rock Me Baby” is the album’s guitar-fest.

The famed Gamble-Huff writing duo wrote “All in the Family Blues” for the album, and its smoky, sultry character is heightened by Eddy Levert, who shares lead vocals with Tito Jackson. The presence of a real brass section makes the song even stronger.

The smooth r&b of “I Got Caught (Loving in a Dream)” closes Under Your Spell on a strong note. The lyrics name-check Johnnie Taylor and Muddy Waters, and it’s clear that Tito has absorbed the qualities that made those artists special.

With Tito as a member, The Jacksons continue as a performing entity. But as Under Your Spell effectively demonstrates, he has plenty to offer as a solo artist.