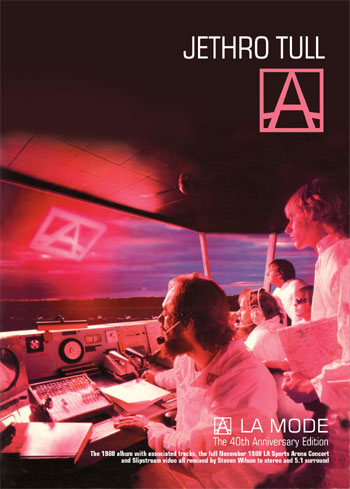 Led by Ian Anderson, Jethro Tull was among the most popular of so-called progressive rock groups of the 1970s. Its distinctive combination of British folk and hard rock textures scored the band worldwide success. And though the group’s lineup shifted constantly, stalwarts Anderson (vocals, flute, guitar) and lead guitarist Martin Barre were Jethro Tull’s creative core.

By the time 1980 rolled around, progressive rock and its related styles were in peril. Punk had already given way to new wave, and the MTV era loomed just over the horizon. After making 1979’s Stormwatch, Ian Anderson was ready to change course. Perhaps in a nod toward the increased popularity of synthesizer-based groups, his next project – intended as a solo album – would feature more keyboards than had been present on the folky trio of Tull albums from the late ‘70s.

But listening some 40-plus years on, A – released in late summer 1980 – isn’t as radically different as its reputation might suggest. Eddie Jobson (Curved Air, Roxy Music and U.K.) provided those keyboards and electric violin, sparring throughout the album with Barre’s lead guitar and Anderson’s flute. Tunes like “Crossfire” owe at least as much to pop and disco as anything else, and “Batteries Not Included” might remind some listeners more of U.K. (or the Buggles). And Dave Pegg’s fretless bass comes as something of a shock. Yet tracks like “Flyingdale Flyer” have enough of the trademark Tull sound to satisfy fans of Aqualung and the band’s other classic-era albums.

Cleverly re-titled A (La Mode), the new deluxe edition of Jethro Tull’s 1980 album features a new stereo remix, courtesy of Steven Wilson. Wilson – the progressive rock renaissance man whose own music has of late taken a turn toward pop – does what he has done for classic albums by everyone from King Crimson to Black Sabbath to Ultravox to Yes to XTC: he applies current-day technology to bring well-known recordings the kind of clarity that simply wasn’t possible when they were originally made.

Wilson’s thoughtful remixes uncover previously-buried sonic gems within the mix. They bring out elements that the artists thought enough to commit to tape, even though those ingredients may have made it to the final mix. His work on A takes what was already a well-recorded album – co-produced by Anderson with longtime associate, engineer Robin Black – and improves it.

But what makes A (La Mode) most remarkable is the inclusion of a live concert. Unavailable for years, the Slipstream concert video was first reissued as part of an earlier (2004) reissue of A. But the new package benefits from featuring the entire L.A. Sports Arena concert, not just parts of it. And that audio has also received the Steven Wilson treatment, rendered in both glorious 5.1 Surround and high-resolution stereo.

As has now become standard with Jethro Tull reissues (and Wilson remix projects in general), the expanded A features extensive bonus material. Those include the original “flat” mix on a DVD disc, numerous outtakes and alternate recordings, and an extensive booklet with words and photos that add to the experience and place it into a larger musical context.