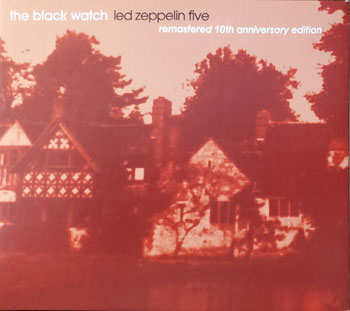 I don’t make a habit of employing Yiddish words or phrases in writing of speaking. I’m not a member of the tribe. But when the situations call for it, when no other word will do, I make an exception. Here goes: The Black Watch has some chutzpah.

Or at least they did in 2011, when they first released an album cheekily titled Led Zeppelin Five. Sure, The Replacements called one of their records Let it Be, so there’s some precedent for this sort of thing. And just like the ‘Mats LP didn’t sound anything like the Beatles, The Black Watch’s 2011 release has exactly nothing in musical common with Robert Plant and his pals.

Instead, Led Zeppelin Five is simply another in a long line of appealing albums from this indie rock outfit led by John Andrew Fredrick. There’s jangle, to be sure, but it’s sometimes presented in minimalist fashion (as on the opener, “Oscillating.” But the chiming melodicism of “How Much About Love” is pure pop of the highest order, with sweet vocal harmonies and just the right amount of distortion and crunch (though you have to wait for those qualities to appear).

Some squalling, atonal guitar from Steve Schayer adds an off-kilter character to “Emily, Are you Sleeping?” But the song as a whole is conventionally catchy. And Rick Woodard’s taut, propulsive drum fills up the excitement quotient.

There’s a hint of danger in “Cognate Objects,” and the arrangement is a bit reminiscent of some of the early work by The Church. “Earl Grey Tea” features soaring guitars and impassioned vocals. The gauzy, contemplative “The Maid’s Been Around” demonstrates The Black Watch’s facility at delivering subtlety and charm via a melody worthy of Crowded House. Had “Only Lasted” been released in the mid-’80s, The Black Watch would have earned a place in the Paisley Underground scene.

In a fair universe, “The Stars in the Sky” would be a hit single. It’s easily the most accessible tune on an album that’s jam-packed with such things. The extended “Kinda Sorta” starts out as an acoustic number, shifts into squealing sheets of feedback and guitar skronk, goes quiet, and ends up as a lovely, elegiac tune. After the atmospheric “Weirdly,” the album – the CD version but not the vinyl – ends up with a cover of The Beatles’ “It’s All Too Much.” In The Black Watch’s hands, the ‘67 tune from George Harrison has more in common with Steve Hillage’s version.

On its original release, Led Zeppelin Five was something like the band’s 12th long player; they had by that time also released at least five EPs as well. And they didn’t slow down; there have been many releases since (along with some career retrospectives). The one-sheet for this remastered reissue tells us that another album, Here & There, is to follow shortly. Presented with that news, Sir Elton John had no comment.