“We started in Wisconsin and ended near San Francisco at the Shoreline Amphitheater,” Tim Bluhm recalls. “And by that time, we were headlining the side stage. It was a big moment for us: a lot of people say that’s the first time they saw us.”

In 2007, around the time of the release of their seventh album, Kiss the Crystal Flake, the Mother Hips launched a festival of their own. In collaboration with Britt Goveah of music events coordinators FolkYEAH, they debuted the Hypnic Festival in Big Sur. Focusing on rock, folk and psychedelic music, Hypnic combines the eclecticism of a large festival with the intimacy of a family get-together. “That’s always been a special thing about it,” Greg Loaicono says. “Every year it gets bigger and better, but it doesn’t get much beyond 400-500 people, including the bands.” Due to the pandemic, the 2020 festival didn’t happen, but with a bit of luck, this year’s Hypnic is scheduled for late September. 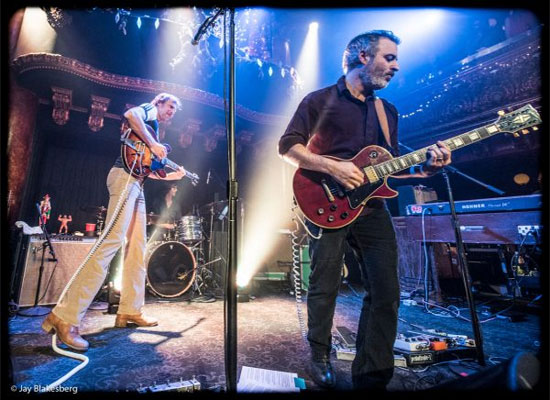 It hasn’t been all good news for the band, though. Along with the good, the Mother Hips have endured their share of setbacks. “If you’re in a band 30 years, shit’s going to happen,” Loaicono says. “Hiatuses, kids, marriages, divorces and everything else.” In 2015, Tim Bluhm suffered a hang gliding accident. That led to a succession of hospital stays, one lasting 62 days. “There were times when we weren’t sure if he was going to make it,” Loaicono says.

“That was unfortunate from several angles,” Blum says with understatement. “We basically had to stop touring for a year, which was not ideal.” But today he places the incident into a larger perspective. “Historically, when we’ve taken breaks – which we’ve done a couple times – it kind of resets everything,” he says. “We usually come back stronger than before. So it’s not all bad.”

The album reissue project has been keeping the band members busy. Blue Rose Music has licensed the albums from their original labels, and proceeds from vinyl reissues will benefit the affiliated Blue Rose Foundation. Bluhm explains that that organization “puts on charity events to raise money for disadvantaged preschool-age children so they can get scholarships to go to preschool.”

Taking full advantage of time off the road, the Mother Hips have been doing more than overseeing the reissue of their back catalog. They’ve also been writing and recording an album of new material, scheduled for release later this year. And Loiacono emphasizes that the let’s-see-where-it-goes approach they’ve followed on previous releases remains their standard operating procedure. “We’re in it right now,” he says. “And it’s always cool, because we really don’t know where it’s going to go.”

On the occasion of the Mother Hips’ 30th anniversary, it makes sense to screen a little video made in 1992, A Hot Lunch with the Mother Hips. That short film captures the original band in the moments before they broke out with their debut record. “We all have that experience of going back and looking at old photographs and stuff,” Bluhm says. Doing that brings back the feelings of that time. “There’s a sense of discovery; everything around you is brand new, and that’s what youth is.”

Loaicono agrees, and he looks back at those flickering images with a sense of wonder. “It was such a different world,” he says. “Every place we went to was all about music, whether we had a show or not. We were just constantly absorbed in that world; that’s all we did.”

Thirty years on, the Mother Hips still aim to capture that magic in their lives and music. “Us old people are always trying to figure out, ‘It used to be magic! Where is it? We can get it!’” Bluhm says with a knowing laugh. “Mostly, it’s right there when you look at those old pictures and those old videos, we were just in it. And we’ve all been there, all of us.”