Hendersonville Symphony, Up Close and Personal 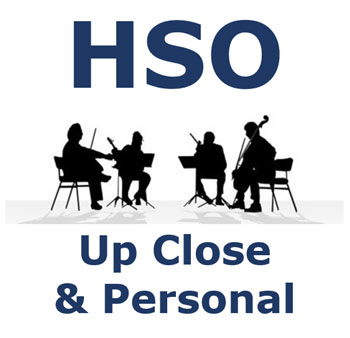 Just over a year ago, the Hendersonville Symphony Orchestra launched a new program aimed at expanding its audience. The orchestra’s Director of Marketing and Special Events, Paul Conroy, explained at the time that the goal of its “HSO Presents” concert series was to “broaden our musical footprint.” Begun in October 2019, that program featured musical styles well beyond classical – jazz, swing, bluegrass and more – in venues outside the traditional concert hall.

The series got off to a strong start. But when the Covid-19 pandemic hit, like most every other live music endeavor, “HSO Presents” was stopped in its tracks. And the orchestra’s 2020 season was canceled as well. But even audiences who can’t attend a live concert still hunger for the music, and the musicians love to play. Responding to those demands in the challenging pandemic era, the orchestra is launching another new program, “HSO Up Close and Personal.”

Conroy explains the concept of the online video-based program. “It’s clear that we won’t return to the stage with the full orchestra for some time,” he says. “So we have started this project to keep in touch with our patrons. These are brand-new performances created with this video series in mind.”

Getting the full orchestra together for a video recording would be logistically difficult as well as irresponsible in this time of social distancing. So the “HSO Up Close and Personal” series instead features small ensembles.

And although the small ensemble format is dictated by circumstances, Conroy emphasizes that there’s a significant advantage for the audience. “With 70 people onstage in the orchestra, the [musicians] tend to blend into the group,” he says. Smaller configurations allow greater focus on the individual players. And that explains the series’ name. “We wanted to give a more personal view of the musicians,” he says.

At the time of our conversation, three performances were in production. “Right now, we just have quartets,” Conroy says. “But we plan on doing duos and different combinations in the future.” And the videos won’t be shaky, hand-held smartphone affairs; these videos will feature multi-camera, location shoots that bring the viewer right up and into the performances.

Conroy is tight-lipped about the specifics of each musical program. “I don’t want to spoil it,” he says with a chuckle. “But it’s a mixture of classical and some pop, and there’s actually some jazz and blues mixed in.” He says that wide variety will reflect the tastes and talents of the featured musicians.

And the locations will be as varied as the music. “We did some recording at Echo Mountain Studio,” Conroy says. “We’ve done some recording at an historic home in Flat Rock and at Burntshirt Vineyard. We’re looking at doing a recording at White Horse Black Mountain, too; we’re spreading it around the community.”

Also in keeping with the theme, each “HSO Up Close and Personal” video will include interviews with the musicians. “You get to know who they are and what their background is,” Conroy says. And in a time when we have to keep our distance from each other, the concert series represents an innovative and safe way to work around that challenge.

The “HSO Up Close and Personal” video series will be free to view for a limited time; visit the HSO website (hendersonvillesymphony.org) or the orchestra’s YouTube channel to watch.