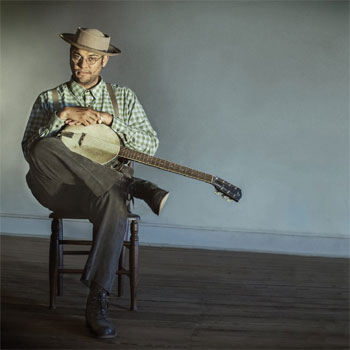 Though he first came to prominence in as a member of Grammy-winning string band the Carolina Chocolate Drops, since leaving that Durham-based group, Dom Flemons has carved out a richly rewarding musical identity of his own. Known as the “American Songster” (the title of his second solo album), multi-instrumentalist Flemons has earned an important place in music both for his songwriting and his celebration of American folk music culture and history.

Across six albums, Flemons has surveyed the landscape of American folk music, bringing to each project the perspective of both musician and folklorist. His 2018 album Dom Flemons Presents Black Cowboys was made with the cooperation of the National Museum of African American History and Culture. In recognition of Flemons’ deep interest in preserving old forms of music and bring to light forgotten and/or untold stories from the American experience, Black Cowboys earned him a Grammy nomination (Best Folk Album). The release was also named Best Acoustic Album at the 2019 Blues Music Awards.

And while varied, Flemons’ work has a unified character; that’s by design. “When I first began to think of myself as a professional musician, I tried to be as consistent as I could be,” he says. But he has also made a point to avoid limiting himself. As a result, he says, “I have also found myself in quite a few different musical situations where I’ve been asked to lend a hand or [be] the ringleader of it all.”

Even though Flemons is an accomplished songwriter, his mission to preserve the work of his musical forbears is at the center of what he does. “When it comes to my recording career,” he explains, “I’ve tried to do a combination of [original songwriting] and creating awareness for songs that are less known. I try to get a lot of those old-time numbers that people haven’t heard, and interpret them in my own ways.”

But he balances his archivist role – one that puts him in the company of celebrated folklorists like Alan Lomax – with his work as a songwriter. “I’m constantly thinking about the past, present and future,” he says. And though he acknowledges a kinship with Lomax, who made countless field recordings that preserved American folk music of the early 20th century, Flemons thinks of what he does as subtly different.

“As someone who’s come of age in this special period of time, I try to move the peg forward on some of the narratives and stories from the past,” Flemons says. “Because some of them, I think, have been lost in translation.” He explains that the potential disconnect is in part the result in changes to the English language and the terminologies used. “Also,” he says, “some of the younger [listeners] are coming from a different perspective.”

But for Flemons, present-day music and the musical traditions of the past really do fit together. “I find that I am connecting the threads on some of the different folkloric stories that have been passed down,” he says. “And I’ve been learning along the way as well.”

Flemons’ Black Cowboys album shines a light on the African American cowboys of the American west in the post-Civil War period. That history is rich with fascinating characters like Bass Reeves. “He was born on the plantation,” Flemons notes. “But through his circumstances, he eventually moved on to Cherokee land, and then that eventually led him to be a Deputy Marshal of the United States.”

Stories such as those take us on a journey. “And what makes it so interesting,” Flemons enthuses, “is that instead of this being action-adventure [fiction] like most Westerns, these were real people!” Works like Black Cowboys bring these characters back to life, rescuing their stories from obscurity and preserving them for future generations.

“It’s amazing to be able to share that with a much broader public,” Flemons says. But his music entertains as much as it instructs. “I didn’t try to speak down to people with the story of Black Cowboys,” he emphasizes. “I just wanted to show them that if they just shifted the lens ever so slightly, they could see that Black cowboys are a part of our everyday American [history].”

And Flemons is quick to point out that other artists make connections between American folk music of the past and the music of today as well. Citing Jennifer Lopez’s recent performance of Woody Guthrie’s “This Land is Your Land” at Joe Biden’s presidential inauguration in January, he says, “Any sort of interpretation begins to have its own effect.”