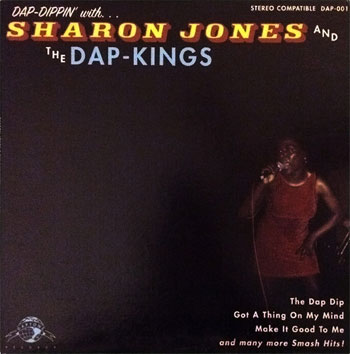 Curated by Eddie Roberts of the New Mastersounds, Rare Sounds is a new subscription service that unearths gems from various genres, reissuing them on vinyl. The first round of releases included The Greyboy Allstars’ West Coast Boogaloo and the debut from Roberts’ band, Keb Darge Presents The New Mastersounds.

The third record in that first round is the debut release from Sharon Jones & the Dap-Kings, 2002’s Dap Dippin’. The record was released on vinyl before, but it has been unavailable in that format for many years. The record show Ms. Jones and her band with a fully formed sound and style, one familiar those who kept up with the funky soul of the late ‘60s and early ‘70s. Jones’ approach is gritty and real, made in Brooklyn, a million miles (metaphorically if not literally) from Berry Gordy’s Motown.

The ten songs on Dap Dippin’ sound like deep cuts from way back when, but in fact they’re all written by Bosco Mann, producer of the record, bassist and bandleader of the Dap-Kings (and head of Daptone Records). Yet though it’s his name on the sleeve as writer, Jones makes every one of these sides her own. A representative cut is “Dap Dip,” more a groove than a song. It’s fiery on vinyl, but one expects it would have been even more incendiary live onstage.

And while Dap Dippin’ isn’t a live album, it benefits from the live energy that Jones and her musicians brought to the session. The group’s later albums may sport a bigger production aesthetic: compare “Retreat!” from 2014’s Give the People What They Want and the difference is staggering. But Dap Dippin’ makes up what it lacks in polish by delivering immediacy.

As part of Rare Sounds’ first box entitled The Essentials, Jones’ debut LP more than delivers on the promise of that label.